It's time for Africa to pursue economic independence – Dr. Kpodar 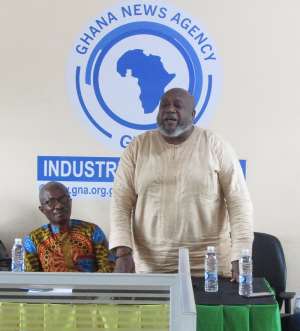 “It is time to achieve economic independence through an African Common Currency, your currency is your economic power,” Dr. Chris Kpodar, President of Solomon Investment Ghana Limited has stated at the Ghana News Agency-Tema Industrial News Hub Boardroom Dialogue in Tema.

Dr. Kpodar revealed that a common currency backed by the many natural resources would properly empower Africa economically and developmentally, and therefore reiterated the call for the African Union (AU) to champion the adoption of an African Continental Common Currency (ACCC) agenda.

Speaking on the topic: “The justification for African Continental Common Currency backed by resources, not by dollar,” at the forum monitored by the Communication for Development and Advocacy Consult (CDA Consult) in Tema, Dr. Kpodar noted sadly that the current group of African leaders and governments lacks the individual country power to push through with the ACCC agenda.

He said our current group of leaders lacks to power to replace other foreign currencies which dominate trading even from African-country-to-African-country trading based.

Dr. Kpodar, who is also a Chief Technical Advisor for the Centre for Greater Impact Africa (CGIA) said it would be difficult for a common currency vision for Africa to be achieved by the current leaders of the various countries as the will and commitment to do so was not available.

“On the whole, there isn’t much hope for the present people who are in power, currently most of them have to go before we can do better; in general, we need a new generation that is putting pressure because the dreams of our fathers were not achieved by our leaders,” he stressed.

Dr Kpodar noted that the use of Dollars, Euros, Pounds, and CFA respectively by African countries is an indication of the strings attached to their former colonial masters who were still controlling their affairs through the usage of money.

The President of Solomon Investment Ghana Limited observed that “if Ghana and the other African countries could come together as a community, as they did in many precious resources, they could have a competitive and comparative advantage over the Western countries that were currently dominating the world because of their currencies.

Mr. Francis Ameyibor, GNA Tema Regional Manager, applauded the advancement of the African Continental Common Currency Agenda which would ignite the true transformation from the political to the economic independence of African Countries.

“Our forefathers fought for political independence, the struggle for true independence was truncated with the freedom euphoria.

“The current leaders must work out and champion another mass struggle for economic independence that is the only way for the African Continent to enjoy total liberation,” Mr. Ameyibor noted.

He stressed that it is time for Africans to start another struggle for economic independence, and emphasized the need to upscale the discussion on the ACCC Agenda across the African States and challenged the AU to create the enabling topics around the issues to generate interest.

Mr. Ameyibor also urged the political, academic, and economic classes as well as the civil society organizations, religious leaders, and the media to galvanize the necessary discourse on the ACCC Agenda.

2023 budget: Expenditure cuts are just a recycle of broken p...
58 minutes ago