Deporting 5,000 Chinese Galamseyers Did Nothing to Clean Up Ghana 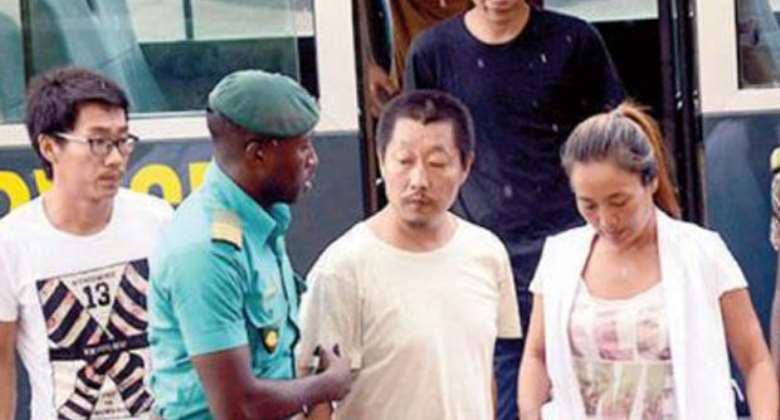 He may have conveniently forgotten this, so somebody needs to remind Yagbonwura Osagyefo Kwame Gonja John Dramani Mahama that it was during his watch and tenure as President of the Sovereign Democratic Republic of Ghana, when the Second-Deputy Chinese Foreign Minister held a standing-room-only press conference in Accra, without any permission or notification from Ghana's Ministry of Foreign Affairs, and mordantly lambasted the Mahama government for the heinously gross mistreatment of Chinese nationals in the country. I wrote about it then, but only to predictably have my article, actually several of them, taken down from the Internet by an unknown entity. The Dear Reader can use his/her own imagination to figure out precisely who deleted my commentaries on the aforesaid event from the Internet. This was sometime during the year 2014, when even the marginal outbreak of a highly localized cholera epidemic could not be effectively managed or contained by the largely administrative deadwoods of the Gonja Government.

So, it comes as rather risible for the former President to be smugly preening and patting himself on the back and claiming with the familiarity of the downright clueless politician that he is that the Chinese government is generally aloof or reticent about the punitive treatment of its nationals resident in Ghana who run afoul of the laws of our land. To be certain, no such assertion could be more preposterous. You see, were he also an honest leader and a morally responsible one at that, Mr. Mahama would also have at least wistfully recalled for the pleasure and enlightenment of his audience that it was precisely about this time, actually nearly two years later, in the fiercely contested runup to the 2016 General Election, when the then-President John “European Airbus Payola” Dramani Mahama, literally, hat-in-hand and in a prayerful knee-crouching fashion, embarked on a ONE-BILLION-DOLLAR LOAN-SOLICITATION TRIP to Beijing with Mr. Seth Terkper, his Finance Minister at the time.

Anyway, widely circulated legend in media circles at the time had it that the loan desperately sought was primarily intended to help the Bole-Bamboi native, from the Akufo-Addo-created Savannah Region, buy his way back to Jubilee House. Actually, the loan was intended to help the Yagbonwura prolong his stay in the John Agyekum-Kufuor-constructed Akan Stool House – diplomatically, congenially and deliberately misnamed Jubilee House – that had been funded by the government in New Delhi. The end result, could, of course, have been predicted well before Messrs. Mahama and Terkper embarked on their ill-fated trip. In Beijing, we are reliably informed that President Xi Jinping had demanded to be provided with a national-development plan from these two impudent and imprudent rascals and clueless beggars and political scam-artists before he would consent to releasing their earnestly requested loan. As well, the joke in town at the time was that Messrs. Mahama and Terkper had not only been given a thorough and an unforgettable dressing down, the pair of gazelles, caught in the headlights of the fast-moving Chinese-made Bullet Train, had been given a sound butt-kicking by President Xi. But, of course, that is not the main purpose or thrust of the present column.

Actually, the main purpose and thrust of this column is the fact that a morbidly superficial Mr. Mahama cannot be expected to fully appreciate the fact that the Galamsey Menace is a structural and institutionally systemic problem that can only be effectively and definitively resolved by the radical reconfiguration or the effecting of paradigm-shifting practical changes to how Ghanaians and, especially our government leaders, use our lands, waterbodies and forestry resources and, indeed, our general environmental resources for the larger and greater good and benefit of society at large. Which, of course, means that the necessary appropriation of our natural resources must be squarely and equally predicated on the healthy and progressive protection of both the users and the resources so used, and thus ensure the prioritization of both the indispensable renewability of these resources and the perennial and environmentally proactive use of these resources.

Now, merely deporting some 5,000 illegal small-scale Chinese miners from Ghana does not amount to much that is practically meaningful vis-à-vis the imperative necessity for the comprehensive reparative cleanup of the environment, if indigenous Ghanaian residents or citizens of the country are allowed to subject our natural and environmental resources to the same predatory and destructive use engaged in by the allegedly deported Chinese Galamseyers. Which immediately brings to mind the dismal performance track record of the previous Mahama regime on the Galamsey battlefront, if, indeed, there had really been any serious and politically concerted attempt to either effectively prohibit or proscribe this human-made environmental hazard at all.

You see, not only had the previous Mahama government not put together any comprehensive strategic plan for the direly needed reclamation of the country's heavily polluted and undrinkable once pristine waterbodies, an electorally vanquished incumbent President Mahama had actually resorted to recklessly promoting the wanton destruction of the country's waterbodies, forestry and other natural resources in the wake of the 2016 General Election, on the rather self-serving and patently and morally inexcusable grounds that the newly elected Akufo-Addo government had more than amply demonstrated its woeful incapacity to creating an adequate volume of jobs at livable wages and salaries. The records are readily available for all who really care to access the same. The grim fact of the matter is that, thus far, it is only President Akufo-Addo who has made any serious or worthwhile attempt to arrest the genocidal and suicidal Galamsey Menace withing the past 10 years.