Nigeria is producing less and less oil. Here's why

By Omowumi Iledare - The Conversation
Article 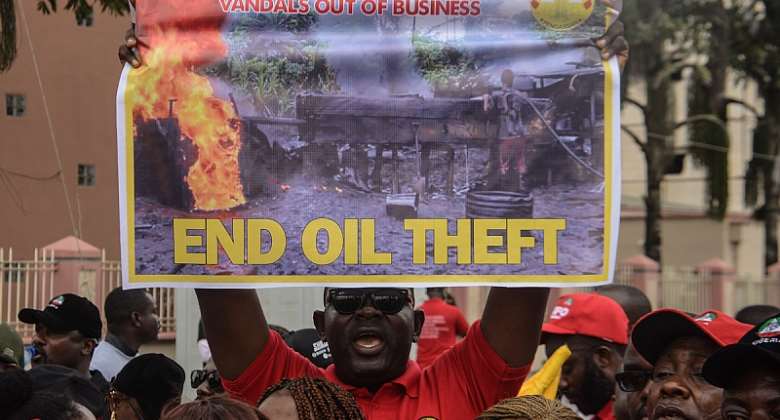 Members of the Petroleum and Natural Gas Senior Staff Association of Nigeria (PENGASAN), during a protest over crude oil theft - Source:

Nigeria's oil output was at the lowest since 1990 as its crude oil production fell below 1 million barrels per day (bpd) in August 2022. And data from the Organisation of the Petroleum Exporting Countries in early September showed that Angola and Libya have overtaken Nigeria as Africa's highest crude oil producers. The Conversation Africa's Wale Fatade asked Omowumi Iledare, professor emeritus in petroleum economics and policy research to explain what's happening.

What are the drivers of the decline in oil production?

Production has been declining since 2012 . It's a combination of a lot of factors.

I think insecurity of assets is top on the list – and insecurity of life. Secondly, the maturity of the fields. Thirdly, moving away from onshore to deep water.

Technical production is what is actually coming out of the wells and fields. This is obviously affected by the number of wells that are put into production and the less producing wells in a field at its peak, less the aggregate field output.

Market production is what the country is able to put into the international market and the domestic market.

Both of them are related, but the market fundamentals of supply and demand affect both of them differently depending on the inventory level. Inventory levels are what's kept in the tank farms where crude oil is stored while waiting for exports and pipeline movement to the refineries.

What are the constraints on what's coming out of the wells?

Since 2003 Nigeria has not put any bidding processes in place to meet exploration and development of fields. And it takes a lot of years before you can tie them up for production.

There have also not been any new leases . The last one was 2007 apart from the bidding for marginal fields in 2003 . As a result we see the maturity of the basins. Playing and production capacity has remained static at about 2.5 million barrels per day.

In the Niger Delta, an investment of about $19 billion is needed to keep the level of production capacity stable, based on my own estimates.

We've not done beyond 2.5 million barrels per day production capacity since 2002.

Nigeria is fortunate that the deep water wells have been able to cover the decline in production from shallow water and the diminishing onshore production. This brought production in Nigeria up to 1.8 million barrels in 2016 .

But now we have theft and vandalism that's affecting the market production – what Nigeria is able to export, what it's able to transfer to the refineries.

There's asset insecurity. Almost 20% of the capacity of Nigeria is being stolen, about 400 to 500,000 barrels per day . But this isn't happening through pipelines. So there must be some type of conniving, because it is just unbelievable that you can move that much crude oil under the watchful eyes of the security agents – either the navy or the army, or whatever. Because there's no way someone can be stealing 500,000 barrels per day by tapping the pipes in the entire Niger Delta.

So that's what I mean by asset insecurity.

What would it take for Nigeria to reduce its heavy reliance on oil?

The engine that will accelerate diversification of Nigeria's economy is oil revenue, and perhaps gas revenue in the future. This is what you can use to diversify the economy, if properly used. Unfortunately, that has not been so. Spending approximately a trillion Naira per year over the last 10 - 20 year, to subsidise petroleum product consumption, is not the best way to spend oil money.

The responsibility of the central government is to create an enabling environment. They are not doing that well because of provincialism.

Second, the diversification of the economy requires the removal of energy subsidies at the consumption end of the energy value chain with zero value addition. The government is spending so much money on the petrol subsidy it is unable to do what really matters. This includes spending money on infrastructure so that goods and services can be moved from the source to the market.

The physical infrastructure that is supposed to be the responsibility of the government is bad because it is not doing what it's supposed to do with its oil money.

The government too should not cloud out domestic investors. The government is borrowing too much money. It should think more about manpower development. It's the government's responsibility to make skill workers available for the industry. But Nigeria's universities have been closed for seven months .

The government must begin to think in terms of decentralising so many things that they take on.

What could the government do to reverse the trend?

You need to make more leases available quickly so that people can begin to get the rights to produce and export.

The biggest challenge right now is attacks on pipelines and criminality. The government must have the courage to prosecute those stealing crude oil and those vandalising the pipelines. If it continues to reward criminality, crime will continue to expand and the oil and gas industry may collapse.

In the process, it must also remove the cloud of uncertainty in oil and gas in Nigeria where energy transition is putting a dampener on investment. Also, the government should put more effort into the use of natural gas for domestic expansion. I don't subscribe to this emphasis on exports of natural gas from Nigeria. I'm a believer that using gas for domestic economic growth is the way to go.

That's why the Petroleum Industry Act is so good. It is very supportive of domestic gas development for local economy.

It is a leadership style that is authoritative but not authoritarian in modelling the way to go. It is not averse to challenging traditional management processes that are not optimal.

Omowumi Iledare does not work for, consult, own shares in or receive funding from any company or organisation that would benefit from this article, and has disclosed no relevant affiliations beyond their academic appointment.