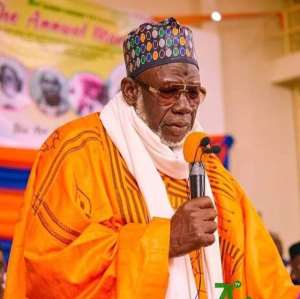 Shieck Alhaj Mohammad Sani Abdullahi Bawa, the Chief Imam for the Western Region has passed on.

The sad demise of the Islamic leader has been confirmed by his Special Aide, Alhaji Kamal during an interview with Connect FM.

The Chief Imam for the Western Region died after an illness on the back of a domestic accident that affected his health.

“He visited his family in Kumasi for a meeting and had a domestic accident. He was descending the home stairs when he fell and became sick afterward. He came back a few days ago fit and active. He, however, fell ill again and we rushed him to the Effiankwanta Regional Hospital but he could not survive and died,” the aide, Alhaji Kamal has disclosed.

Shieck Alhaj Mohammad Sani Abdullahi Bawa passed on at age 74. He was installed as Western Region Chief Imam on May 21, 2022.

Reacting to the death of the Chief Imam, Hearts of Oak, a club he formerly played for has extended sympathies to his family.

“We are deeply saddened by the passing of Alhaji Sanni Abdullai, a former goalkeeper of our glorious club.

“We sympathise with the bereaved family. May Allah grant him eternal rest in his glory,” a post on the club’s Twitter page has said this afternoon.

Where are DISECs in this whole galamsey brouhaha – Otumfuo q...
48 minutes ago

Akufo-Addo announces plan to establish Tourism and hospitali...
48 minutes ago