Who is Giorgia Meloni, the far-right contender set to be Italy's first female PM? 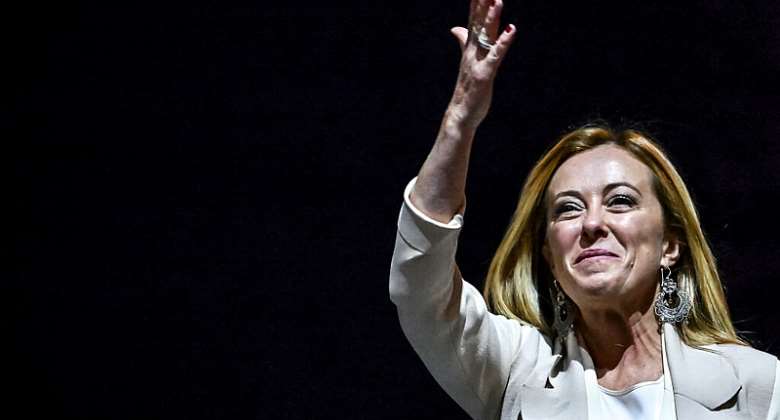 Giorgia Meloni, who has campaigned under the slogan of "God, country and family", is likely to lead Italy's most conservative government in years if her Brothers of Italy party and its allies win the general election on Sunday.

The Brothers of Italy, a far-right party that has seen its support surge since Italy last voted in 2018, is campaigning in coalition with Matteo Salvini's populist League and centre-right Forza Italia, led by former premier Silvio Berlusconi.

Opinion polls put Meloni's party at around 24 percent of votes, suggesting she will head what would be Italy's first far-right-led government since the fall of Fascist dictator Benito Mussolini after World War II.

Since Prime Minister Mario Draghi's government collapsed in July, the Brothers of Italy has been polling at around 24 to 25 percent, ahead of the centre-left Democratic Party on 21 or 22 percent, and followed by populist Five Star Movement on 13 to 15 percent.

With the League at around 12 percent and Berlusconi's party at 8 percent, Meloni's coalition looks on course to secure between 45 and 55 percent of seats in parliament.

"We are ready! You will see on Sunday," Meloni declared to a crowd in Rome, her home ground, at a rally on Thursday.

She has vowed to govern for five years with a programme that includes low taxes, higher social spending – and strong defence of Italy's interests on the world stage.

Meloni and Salvini both pursue a nationalist agenda and demand an end to mass migration, while emphasising Italy's "Judeo-Christian" past and vowing to boost its plummeting birth rate.

While they and Berlusconi have been allies since the last general election five years ago, until recently Salvini led their coalition – which already controls 14 out of Italy's 20 regional councils.

However, Brothers of Italy has grown to eclipse the League, especially after Meloni – unlike her allies – refused to join the broad coalition government led by centrist Draghi.

Frustrations with Draghi's coronavirus measures, long-standing economic complaints, fears of illegal immigration across the Mediterranean, and fractured opposition from the centre and left have fuelled voters' turn further and further to the right.

Brothers of Italy won just 4 percent of votes in 2018; five years later, they are predicted to do around five times better.

Meloni would be the first woman ever to lead an Italian government. But feminists and other rights activists are concerned by her aggressive defence of what she calls "traditional family values".

"Yes to natural families, no to the LGBT lobby! Yes to sexual identity, no to gender ideology! Yes to the culture of life, no to the abyss of death!" Meloni roared in a speech in June at a rally of the Spanish far-right Vox party.

Abortion became one of the most divisive campaign issues after Meloni said she wanted to promote programmes encouraging women with financial or other difficulties to carry pregnancies to term.

"We won't touch the abortion law. We just want [women] to know there are other options," she said.

Emma Bonino, leader of the left-wing +Europa party and a women's rights activist who did jail time in the 1970s for her fight to legalise abortion, doubts that Meloni will move to recriminalize it.

But she fears Meloni will instead "push for the law to be ignored", exacerbating an existing problem – difficulties getting hold of abortion pills or finding doctors willing to perform terminations. Under Italy's current law, health workers are allowed to declare themselves "conscientious objectors", with more than two-thirds of gynaecologists refusing to carry out the procedure.

Runaway inflation, a looming winter energy crisis and tensions with Russia over the war in Ukraine have dominated the election campaign in Italy, which is still recovering from the trauma of the coronavirus pandemic.

Italy is set to receive almost €200 billion of EU post-pandemic funds by 2026 in return for structural reforms.

The elections are therefore being closely watched in Brussels, where the prospect of a eurosceptic, populist government heading the eurozone's third largest economy has sparked concerns.

Meloni no longer urges an exit from the euro but has vowed to lead an Italy "strong, serious and respected on the international stage", while the right-wing coalition's programme calls for a review of EU rules on public spending.

"To the EU I say, 'The free ride is over'," she told another campaign rally last weekend, vowing to "start defending Italy's national interests like every other EU member already does".