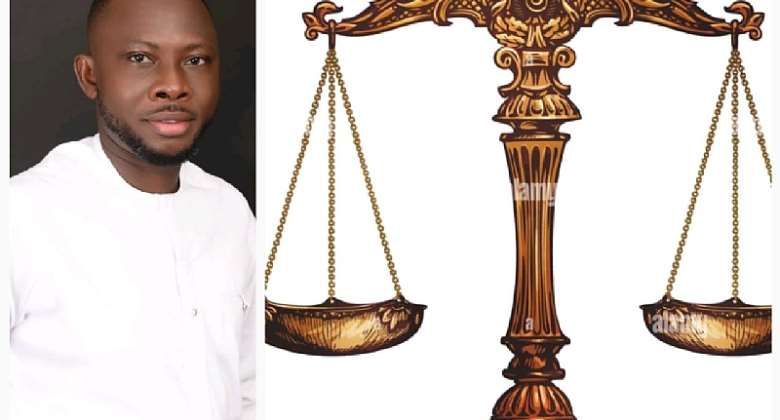 The saying that one can never know the depth of a well until s/he steps in with one leg, is, but relatively true. Just as I was about settling in, I had my first dose of what would have made me opt out of the LLB race. “To be a lawyer in Ghana is a privilege and not a right”…so said by a lecturer who happens to be a lawyer himself.

Decoding the essence of the above statement took me days until when I decided to flip through the Constitution, 1992, to be sure whether articles 37 and 38 were predicated on discretion or made mandatory on the part of the state and it's parastatals. For the benefit of all, I wish to extract the two articles in order to situate the subsequent submissions in proper context.

Article 37 of the 1992 Constitution of Ghana, under social objectives states, “the State SHALL endeavor to secure and protect a social order founded on the ideals and principles of freedom, equality, justice, probity and accountability as enshrined in Chapter 5 of this Constitution; and in particular, the State shall direct its policy towards ensuring that every citizen has equality of rights, obligations and opportunities before the law.” As part of the basic principles of making meaning out of legal constructions as it is in the constitution, we are tasked to employ the reasoning of the ordinary man on the streets, to start with. In this attempt, I am inclined to co-join the ordinary interpretation of article 37 with article 38. Article 38 under Educational Objectives says, “the State SHALL, provide educational facilities at all levels and in all the Regions of Ghana, and shall to the greatest extent feasible, make those facilities available to all citizens.”

To the extent that the 1992 Constitution in article 37 mandates the state to endeavor to direct its policies to ensure that every citizen has equality of rights and opportunities, and indeed, every citizen of Ghana has the right to education, I shudder to think that the foundation of the statement that “to be a lawyer in Ghana is a privilege and not a right”, is weak, unfair and pinned on convenience and caprice.

I am further inclined to believe that a system only gets better and working only if the members within that system gets periodic opportunity to assess, evaluate and critique it. To take the substance of the evaluation and criticisms and apply same to envelope the sentiments and ambitions of the people is just as good as crafting a good law. The Ghana legal system has been on the hot seat for sometime now. Judges have had their bite in respect of corruption and delivering unfair verdicts not grounded on law, lawyers have had theirs in same measure and the legal education and the systems around same have had to the take the chunk of the rots being discussed.

In Ghana, everyone seem to know the problem but no one is ready to offer or implement the solution. If not, I don't see why a lecturer, who's a Lawyer anyway, would stand before Level 400 LLB students and confess that, the educational set up in Ghana is producing students who can only memorize and not students who are prepared to engage any critical thinking that Ghana need to develop. Just after the dot (.), the same lecturer is using same methods of memorize, pass and forget to lecture same students he expects to thinking critically. He worsens the case by threatening students never to read outside of his lecture notes and cases he gives. Who is to blame? Just a few days ago, I watched the Minister of Education of Ghana, lamenting how the educational system in Ghana is churning out students who can only memorize but cannot think critically. I lost complete hope after listening to him. Meanwhile, the same minister is supposed to lead in policy direction as far as education is concerned in Ghana. So, who's suppose to offer and implement the solutions?

It was all joy when I was offered admission to read Law—this was a long dream come true. Like I always thought, I was going to be washed, cleaned and ushered into a new world of thinking where logic takes precedence over “street thinking.” Fast forward, my expectations are getting dashed by the day because it is business as usual. Perhaps, the best amongst us, LLB students across all faculties, is most likely to be the one who has the capacity to memorize names of cases, names of authors of books, dates when some Justices died in the 18th Century in Uk, and obviously not those who have the capacity to think through and fashion out solutions the law has proffer for the welfare of the Ghanaian society, as we are made to think.

If the Law is largely about Justice and Justice is somehow inflamed by fairness, then Ghana is yet to have “The Law”. Why should we have an unfair system attempt to trigger any conversation about fairness? The brain drain that is currently taking centre stage in the medical profession will soon hit the legal profession.

As of June, 2021, there were 3,213 registered practicing lawyers in Ghana. Out of this number, just less than 15% are practicing in the entire 5 regions of the North. Not until some Northern young men and women started to agitate, Northern Ghana had no single Law faculty. Meanwhile the obligation of the state as contained in article 38 of the 1992 constitution where educational facilities ought to be made available to all regions of Ghana, is mandatory and not optional.

To be fair, I am not for mass production of Lawyers into the system in principle, owing to the fact that, it will be very dangerous since crude and half-baked lawyers will find their way into the system and stain the enviable image of the legal profession. In any case, is the current “mafia system” any better? I certainly will go for a system which will set up a very transparent and effective screening mechanism which will get well trained and professional
Lawyers into the system while ensuring that those who are genuinely qualified and have the passion to practice are given the opportunity without their backgrounds used as a factor.

I was told sometime ago that, to get a pass card to enter Makola to undertake the professional course, which content is no substantially different from what which we undertake at the various faculties, one's background use to be a factor; whether you had a lawyer or a judge in your family or you have any closed ties with one. Maybe that is why the cliche that to be a lawyer in Ghana is a privilege and not a right suffices.

If the General Legal Council believe that the number of students being churned out by the about 13 law faculties across the country is way too much to be in the system, it can, as required the General Legal Council Act, 1960 (Act 32), regulate the faculties and prescribe for them a required and reasonable number to admit. This issue of having to leave the faculties to admit more numbers just to make profit at the expense of the expectations and ambitions of many helpless students, is by any imagination, unfair and unjust. You do not allow huge numbers from the entry point only to frustrate same with some technicalities which are alleged to be borne out of mafia and convenient tactics.

I listened to one Chief Justice at one point in time where she openly declared that, it will never be under her tenure that legal education will be expanded. Her reasons were that, it will open the floodgates for the mass production of half-baked and unqualified lawyers into the system. I felt disappointed initially but was drawn to the fact that I was still in Ghana where conventions mostly take precedence over established laws and written legislations. As a Chief Justice, it is easier to ensure a clean system is established to get more Lawyers trained than it is to get a system that frustrate innocent students in the name of getting refined Lawyers trained.

I was just awoken to the news that the questions for the Law Entrance Exams scheduled for today, 23rd September, 2022 was leaked and same exams had to be postponed. What is our fear when the system is faulty at all levels? Once you train us to memorize our way to the Bar, be ready to face us when we employ every means to be called to the Bar. When something is wrong with the system, stop gagging the people who suffer from inadequacies of the system from speaking up. When all of us become timid and only nod and take notes as though we are a bunch of Kindergarten toddlers, we will get out there as lawyers who can't even recite the title of a case and can't defend our own rights. Lawyers are supposed to be advocates of the law, and advocates are to speak for it when it is right and to equally speak against it when it is wrong. The General Legal Council should avert its mind to section 13 subsection 2 of Act 32 which clothes the council with the power to act.

Expand Legal Education and ensure a proper regulation to avert a mass production of lawyers without capacity into the system. Otherwise, we shall always memorize our way to the BAR.