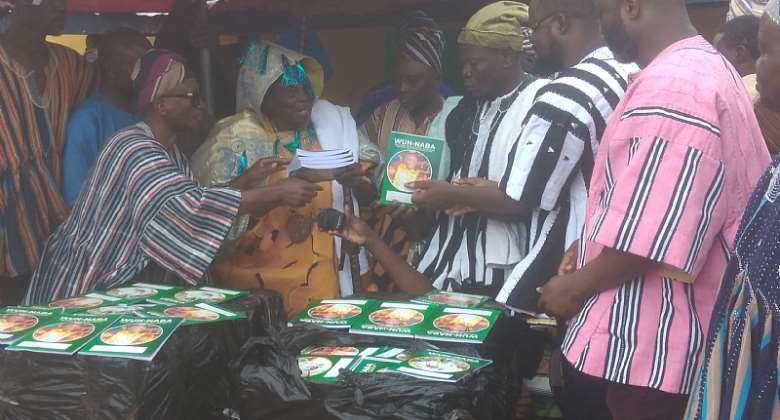 The Paramount chief of the Wungu traditional area in the West Mampurusi Municipality of the North East Region, Wun-Naba Naa-Zori Alhaji Saaka Sulemana has donated five thousand (5,000) exercise books to be distributed to students in the area.

The donation was made on Friday, September 16, 2022, at his palace in the presence of parents, students, teachers, chiefs, government officials and directors of education.

The Wun-Naba in a speech read on his behalf by Dr Abdulai Abubakari, a senior lecturer at the University for Development Studies (UDS) and Manager of the Naa-Zori Education Fund, said the donation formed part of his efforts to complement the achievements of government to improve education in the area.

The Chief also said the 'move' also forms part of a commitment by his palace to reduce the burden of parents in educating their children in and outside the Wungu traditional area.

He noted further that the donation would encourage education in the country.

"This donation is also in line with the Government's efforts to provide Free Senior High Education," Wun-Naba Alhaji Sulemana said.

The chief also said he has allocated one and a half acres of land to the government for the construction of the North East Regional Education Office. Adding that several acres of land have been made available for the expansion of the Wale Wale Senior High Technical School to help make the stay of teachers and students comfortable.

Naa-Zori Alhaji Sulemana called on Chiefs and traditional leaders as well as non-governmental organisations to make it a part of them to always support education to help the country in the development of its human resources.

He appeals to the general public especially NGOs and philanthropists to support the Education Fund by donating money and other educational materials to help reach out to many students and schools.

The Municipal Chief Executive(MCE) for the West Mapurusi Municipal, Mr Arimeyaw Issahaku Somo Lucky, in a submission, commanded the Wun-Naaba for the gesture.

He also pledged an annual donation of Ghc10,000.00 to the Fund by the Municipal Assembly to help promote education in the region.

The North East Regional Education Director Mr Simon Anane Amokasi, in his submissions, after he received the donation, thanked the Wun-Naaba Naa-Zori Alhaji Sulemana for the support.

He also appealed to other chiefs in the region to copy the footsteps of the Wun-Naba to help improve education in the area.

Some headteachers who spoke to this reporter expressed gratitude to the Wun-Naaba for the support and pledged to use the books to achieve the purpose for which it was donated.