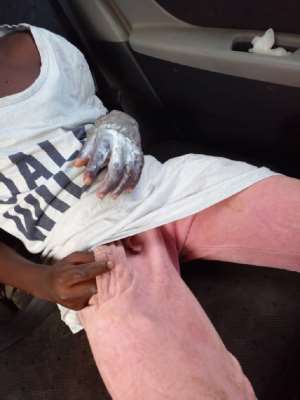 As punishment for destroying a neighbour’s mobile phone, a father, who identified himself as Bright Mawuena, forced the left hand of his own eight-year-old daughter in boiling water until her fingers got burnt and bruised.

The incident took place near Iconic Montessori School at Abonya, Dodowa, in the Greater Accra Region on Thursday, 22 September 2022.

The father confessed to inflicting the harm on the child when he was confronted by a local pastor, Bishop Jordan K. Owiredu of Redeemed Family Chapel International, a church in the locality.

Bishop Owiredu told ClassFMonline.com that he had gone to inspect his construction site in the area this morning (Friday, 23 September 2022) when he heard some angry neighbours confronting the man over the incident.

Some of them were heard condemning the father and urging that he be taken to the police station before he ends up killing his own daughter one day.

Enraged by the incident, Bishop Owiredu single-handedly held the man by his hand and led him to the Dodowa police station to lodge a complaint.

On the way to the police station, the father told the pastor that he punished his daughter in that manner because he was tired of warning her against taking and touching things that did not belong to her.