Laver Cup brings an end to life in the Federersphere 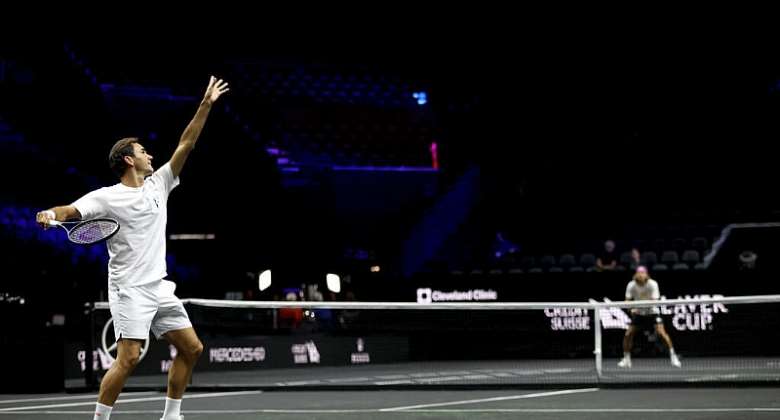 "Alpha males go gooey" would be a possible headline for the prelude to the 2022 Laver Cup. "Brothers in larmes" could work too for the Franglais-loving fans of Roger Federer, Rafael Nadal, Andy Murray and Novak Djokovic – the fabled "Big Four" of men's tennis.

Federer's flintiest opponents over the past 20 years were heaping paean upon encomium as Friday's start to the intercontinental team tournament drew nearer.

The eulogies positively gushed forth. And why not? The quintessential tennis player – winner of 103 tournaments including 20 Grand Slam trophies – will glide and glisten no more in the ATP parish once the Laver Cup finishes on Sunday.

The 41-year-old Swiss called time on his dazzling career on 15 September after 24 years of thrills and spills questing for the sport's most glittering prizes.

The Laver Cup – Federer's big idea to honour one of his idols Rod Laver – seems the most cultured and elegant way to bow out.

Federer's announcement has driven the narrative for the fifth edition of the competition.

"And he was having success and then I was able to have an amazing rivalry with him and yet – and this is something that we are both very proud of – to have a friendly rivalry.

"It was not easy sometimes as we were both playing for important things for our tennis careers.

"But at the same time we were able to understand that at the end personal relationships are sometimes more important than profesional things."

If the two can see the ball flying at them through the tears, Federer and Nadal will try to win a point for Team Europe against Jack Sock and Frances Tiafoe who will be representing Team World in the fourth match on day one of the tournament.

"I think it will be difficult on Friday night," said Nadal without a hint of irony.

"I know at the end of the match that one of the most important players in my tennis career is leaving. To live this moment will be difficult.

"I'm excited and grateful to be able to play with him. I will try my best to make sure this moment will be more special."

Nadal v Federer clashes have been transcendent pieces of theatre over nearly two decades. That Federer should conclude his odyssey with Nadal at his side will provide a powerful image for the ages.

And while Djokovic has pointedly identified Nadal as the big rival of his career, a similar scenario seems unlikely. Their battles have never been able to compete on the same spiritual plain as Federer taking on Nadal.

Some of Djokovic's 59 encounters with Nadal – such as the six-hour slugfest at the 2012 Australian Open final and the quarter-final at the 2022 French Open – have been visceral.

But the matches en masse have failed to capture the imagination quite like the Roger and Rafa extravaganzas.

"It's a sad day for tennis," said Djokovic of Federer's retirement. "But Roger's legacy will live forever."

It took some of the young guns appearing in the Laver Cup to inject a touch of levity to such solemnity.

"I was practising with Roger," said Stefanos Tsitsipas. "And after the first few minutes I said to him: 'Are you sure you want to be retiring?'

"I was looking forward to having him back on tour," added the 24-year-old Greek.

"He's the reason I play with a single-handed backhand." Bless.

Tiafoe, who reached the semis at the US Open earlier this month, said: "We've got a team of guys who are hungry for a first win. We're here to go for it."

"Hopefully I can contribute to that," added Sock who, with 16 points over his three appearances, is Team World's most successful player.

"We have had our chances in the past," the 29-year-old American added.

"And we haven't always taken them. I feel that we've sometimes been playing catch-up over the first two days.

"Friday night will be beyond iconic," said Sock. "I'm just stoked to be part of it with Frances but we're not going to be holding anything back."

A point is awarded for each victory on the first day. On Saturday, there will be two points for a win and on Sunday, three points. The first team to 13 points will claim the trophy.

"I'm excited to be playing two players who are up and coming," quipped Tiafoe.

Nice touch, indeed. Federer had a fair few of those.