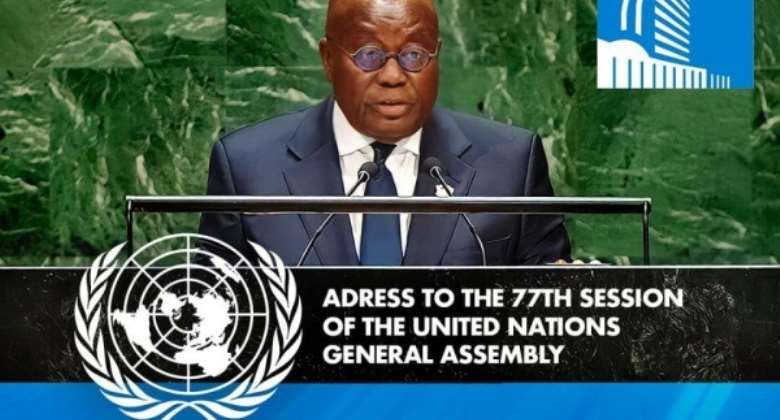 President Nana Addo Dankwa Akufo-Addo has warned that the destabilising conflict in the Sahel, which is perceived as a West African conflict would have a wider implication for the world if not tackled collectively.

Speaking on Wednesday at the 77th Session of the United Nation’s General Assembly, in New York, President Akufo-Addo said Ghana, sees the terrorist and violent extremism differently and had watched in horror, as the unrest moves from the Sahel, inexorably, to the West African coastal countries.

The President said all of Ghana’s neighbours had suffered terrorist attacks, while some had lost territorial space to the invading forces.

Addressing member countries on the theme: “A Watershed Moment: Transformative Solutions to Interlocking Challenges,” President Akufo-Addo said the terrorist pressure has provided a pretext for the reappearance of military rule in the West African region.

President Akufo-Addo said two of three military rule countries had borne the brunt of the terrorist outrages in the Region–Mali and Burkina Faso: adding “It is a development we are determined to reverse so that the ECOWAS space remains a democratic one.”

President Akufo-Addo said member countries had been forced to spend huge amounts of money on security, monies that could have been spent on educating and giving skills to young people; “on building much-needed roads, bridges, hospitals and other such infrastructure.”

“This is a global problem, deserving the attention of the world community for a global solution,” the President stated.

“Mr President, I am contributing to this debate on a date that has special significance for us in Ghana. 21st September is the date we mark the birth of our first President, Dr Kwame Nkrumah.

President Nkrumah, the Pan African Champion, would have been 113 years old today and it is worth recalling on this day the driving force of his political career, which was to contribute to the birth of a united Africa, i.e., a United States of Africa.”

President Akufo-Addo indicated that Africans recognise today, more than ever before, the importance of the strength in unity of Africa, “and we are working to shed that image of a helpless, hapless continent.”

The President said there was a renewed commitment toward inclusive and sustainable industrialisation and economic integration of the continent.

“We, the current leaders of Africa, should be determined not to waste the crisis that confronts us,” the President urged.

Incidentally, President Akufo-Addo said 2022 had been billed as Africa’s Year to take action on food and nutrition development goals.

“We see the current geopolitical crisis as an opportunity to rely less on food imports from outside the continent and use better our 60 per cent global share of arable lands to increase food production.”

President Akufo-Addo said Africa had seen the devastating impact of relying on Russia and Ukraine for 70 per cent of its wheat consumption.

“We have enough land, enough water, enough gas and enough manpower to produce enough fertiliser, food and energy for ourselves and others,” he stated.

However, the President said Africans also recognised that they cannot do it all by themselves, adding: “Our message to the global investor community is, therefore, this: Africa is ready for business. Africa needs you and you need Africa. You need Africa because Africa is busily building the world’s largest single market of 1.3 billion people.”

Soon, Africa would have a customs union and a continental payment system that would accelerate and facilitate trade amongst themselves.

“See Africa for what it is: the new frontier for manufacturing, for technology, for food production. That is why six years ago, I launched in Ghana the successful policy of ‘One District One Factory.

A policy, with government incentives, that has directly seen, so far, some 125 factories being set up in various districts across the country, leveraging on each area’s competitive advantage.”

In addition to Ghana’s industrialisation drive, President Akufo-Addo’s government, six years ago, embarked on an aggressive policy of planting for food and jobs, which has helped the country’s farmers increase their yields in folds.

“Indeed, we are recognising that many of the things we import can be found or produced in Ghana, or other African countries,” he stated.

The African Continental Free Trade Area, whose Secretariat is located in Accra, Ghana’s capital, is driving intra-Africa trade and creating an unparalleled momentum for the continent’s economic diversity and transformation.

“We know that industrialisation is the way to go,” President Akufo-Addo indicated, and, with the single market as an added incentive, the government of Ghana had taken policy measures to add value to the country’s natural resources.

“For example, we are processing more of our cocoa, refining more of our gold and we are determined to exploit the entire value chain of our huge lithium deposits,” he said.

Ghana had, so far, attracted six of the world’s biggest automobile manufacturers to set up assembling plants in Ghana, before producing them in the country.

In line with the African Union’s Agenda 2063 and the United Nation’s Sustainable Development Goals (SDGs), Africa’s ambition is to transform its food systems over the next decade, anchored in the Comprehensive Africa Agriculture Development Programme (CAADP) and the Malabo Declaration on Accelerated Agricultural Growth.

President Akufo-Addo said what the continent required now was support from the investor community for the rolling out of Africa’s lucrative agro-industry, and for investors to see agribusiness as much more an opportunity than the perceived, exaggerated risk which has been the false, but dominant narrative.

The President said, “history will judge us all harshly if we do not seize the opportunity to make the changes that will enable us to deal with the many problems we face.”