September 21 would be restored as Founder’s Day — Dr. Otokunor hints 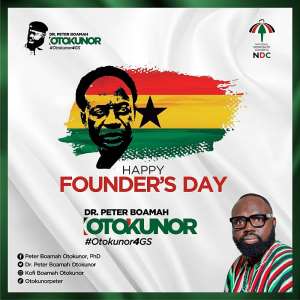 The Deputy General Secretary of the National Democratic Congress (NDC), Dr Peter Boamah Otokunor, has set the tone for a possible restoration of the symbolic celebration of 21st September in Ghana’s history as Founder’s Day.

It will be recalled that late President John Evans Atta Mills declared September 21 in 2009 as a statutory holiday in commemoration of the legacy and achievements of Ghana’s first president.

But President Akufo-Addo in 2017 presented legislation before Parliament setting aside August 4 as a day to celebrate Ghana’s founders, including ‘The Big Six’, ditching September 21, the original date.

It was then changed from Founder's Day to Founders' Day with an argument by the NPP that the country cannot continue to celebrate only Kwame Nkrumah.

September 21 was then marked in Ghana's calender as Kwame Nkrumah Memorial Day.

General Secretary of the NDC, Johnson Asiedu Nketia at the time argued that it is an established fact that Dr. Kwame Nkrumah fought for the Independence of Ghana and not the President’s father, Edward Akufo-Addo or his grandfather, J.B Danquah as “he wanted all of us to believe”.

“We won’t allow Akufo-Addo to change our history so he should organised a funeral to honour his ancestry in his hometown”.

Despite the resistance by the opposition NDC and some groups, the Akufo-Addo-led NPP used its ultra-majority numbers in Parliament to have it done.

Five years on, Dr Peter Boamah Otokunor, who is lacing his boots to contest the General Secretary position of the party has hinted that a future NDC will revert to the original date.

He said this when he marked September 21, 2022, as Founder’s Day in celebrating the life and contributions of Ghana’s first president Dr Kwame Nkrumah despite amendment.

Dr. Otokunor noted that he will continue to observe the day as such until a future NDC government officially restores the commemoration through proper legislation.