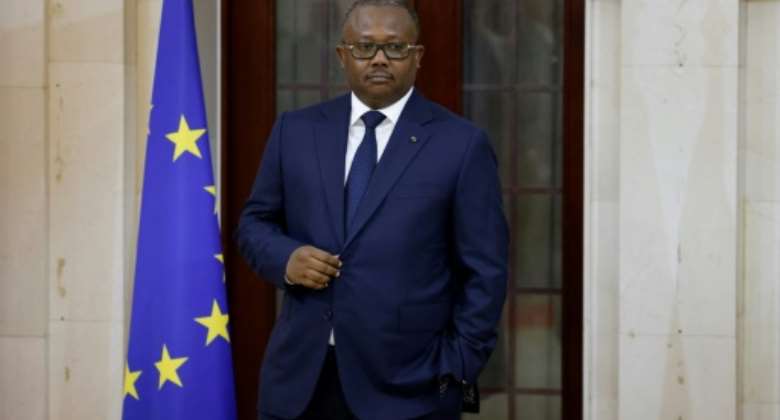 Three years in power before a return to civilian rule is 'unacceptable for ECOWAS,' Umaro Sissoco Embalo said. By Ludovic MARIN (AFP)

Guinea's ruling military junta on Thursday slammed the "puppet" president of the West African regional bloc ECOWAS and accused him of "lies" over his call for sanctions on Conakry if it seeks a three-year transition back to civilian rule.

The poor but mineral-rich nation has been ruled by the military since a coup in September 2021 that ousted president Alpha Conde, in power since 2010.

Guinea's junta-appointed prime minister, Bernard Gomou, slammed Economic Community of West African States chief Umaro Sissoco Embalo, describing him as a "puppet wearing the mantle of a statesman" in a statement on Thursday.

Gomou said Embalo, who is also president of Guinea-Bissau, was an "overexcited" man who "forced his way in" to the ECOWAS presidency.

The prime minister also pointed to the two countries' geographical closeness and blood ties, but warned "no political upstart, let alone a badly briefed opportunist, will lead us to destroy this precious heritage".

During a visit to Guinea, Embalo had said he had secured an agreement with the junta to give way to elected civilians after two years.

Three years in power before a return to civilian rule is "unacceptable for ECOWAS", Embalo said on Wednesday.

"Unacceptable and non-negotiable," he added, in an interview with France's RFI and France 24 broadcasters, a day before an ECOWAS summit on the sidelines of the United Nations General Assembly in New York.

Embalo said in the interview that if the junta maintained that timetable, there would be sanctions -- "heavy sanctions, even".

"Crude lies and intimidation are backward steps that dishonour (Embalo) and at the same time tarnish ECOWAS' image," Camara said in a video received by AFP.

The West Africa bloc has been struggling with a string of military coups in the region in the past two years.

Camara accused Embalo, who took over the rotating presidency of the conference of West African heads of state a few weeks ago, of being "distinguished by his personal positions in defiance of his fellow presidents".

He accused Embalo of "putting on a show" and of disregarding the ECOWAS presidency, of forcing his West African counterparts to hold a summit outside West Africa and of wanting to force through sanctions against Guinea.

"We are not in... a reality TV relationship," Camara said, accusing Embalo of "bawdy" diplomacy.

"By forcing his peers to hold this summit outside his geographical space, his leadership will have allowed an opportunity for others not to take us seriously."

Mali underwent coups in August 2020 and May 2021, followed by Guinea in September 2021 and Burkina Faso in January.

ECOWAS has lifted tough sanctions that had been imposed on Mali's military regime, accepting a March 2024 return to civilian rule.

But Mali and Guinea remain suspended from ECOWAS bodies.