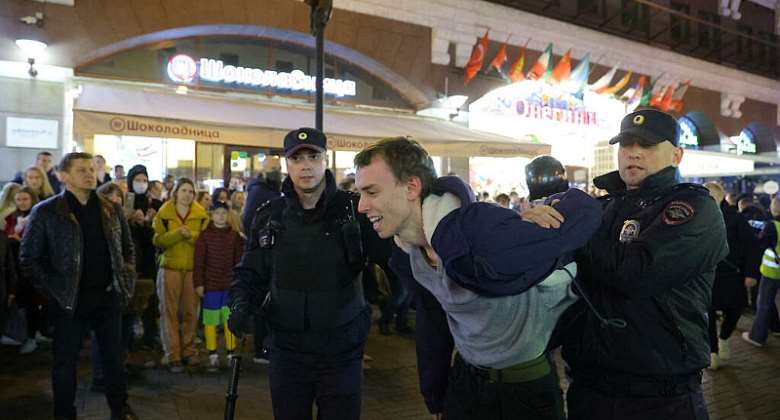 The independent OVD-Info protest monitoring group said that according to information it had collated from 38 Russian cities, more than 1,311 people had been held by late evening.

It said those figures included at least 502 in Moscow and 524 in Saint Petersburg, Russia's second most populous city.

Spike in one-way flights out of Russia

"In a number of regions, there were attempts to stage unauthorised actions which brought together an extremely small number of participants," Volk was quoted as saying.

"These were all stopped. And those persons who violated laws were detained and taken to police stations for investigation and establish their responsibility."

One-way flights out of Russia were rocketing in price and selling out fast on Wednesday after Putin ordered the immediate call-up of 300,000 reservists.

Rise in cross-border traffic in Finland

Putin's announcement in a television address raised fears that some men of fighting age would not be allowed to leave the country and prompted one-way flights out of Russia to sell out fast.

Almost 5000 Russians arrived in Finland via the eastern border on Wednesday, up from the a little over 3000 a week earlier.

Belgrade is the only European capital still accepting flights from Russia.

One passenger – Julia – told RFI that said she fears for her family: "Many of [my] friends have already received their mobilisation papers, as have [my] colleagues.

"My brother has been in the army for three months. They sent him there when he was barely 20 years old. He was in Izum and Kharkiv."