Ghana’s coconut sector has the potential of generating an annual revenue of $2.8 billion - GEPA 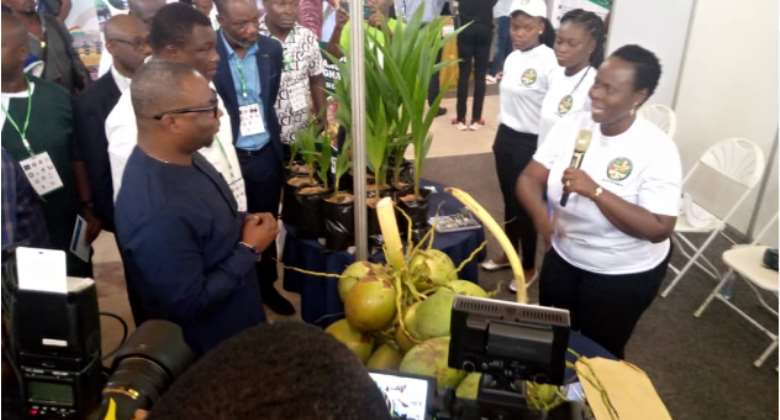 The Ghana Export Promotion Authority (GEPA) has indicated that Ghana’s coconut industry has the potential of generating USD2.8 billion in revenue from semi processed and processed coconut annually if more investment is channelled to the sector.

Mr. Samuel Dentu, Deputy Chief Executive Chief Officer of GEPA in charge of finance who disclosed this at the second edition of the international coconut festival said the sector provides limitless opportunities of derivatives due to the functional nature of the tree crop.

According to him, in the 2021 performance report of Ghana’s Non-Traditional Exports, the coconut sector rakes in USD11.44 million, whiles coconut oil alone realised USD7 million dollars, representing an increase of 132 percent and 33 percent respectively from 2020.

This increase in revenue, he said, is an indication that more income can be generated from the planting and production of coconut if the country pays more attention to the industry.

The four days festival, organized by the Africa Coconut Group and (GEPA) was officially opened on Tuesday, 20th September, 2022, at the Accra International Conference Center brought together stakeholders within the coconut value chain.

This year’s festival, which is under the theme: ‘Repositioning Ghana’s Coconut Sector for Accelerated Industrialization’, aims at exploring ways of expediting growth of the sector by adding value to the raw materials produced from coconut and also put a spotlight on Ghanaian businesses in the coconut value chain while helping them to connect with the relevant stakeholders and investors.”

Mr. Samuel Dentu noted that the festival, among other objectives intend to showcase government industrialization agenda and to move forward the One District, One Factory initiative by encouraging companies to establish cocoanut processing factories at the districts.

In 2017, he said, GEPA launched the Coconut revitalization programme with the clear objective of reviving the then ailing coconut economy and improve the supply quantity of the value chain.

The GEPA deputy CEO said the authority was proud to partner African Coconut Group to organise the festival in collaboration with the Ministry of Food and Agriculture (MoFA), the Ministry of Trade and Industry, the Ghana Free Zones and other agencies.

Mr. Davis Korboe, Chairman of the Africa Coconut Group, speaking at the opening ceremony of the festival said the theme for the second edition of the festival was strategically chosen in response to the growing need to diversify Ghana’s industrialization expo trade through aggressive supply of coconut to meet the shortfalls in the industry.

He added that, the second edition is different in terms of prospect, values and economic potentials within the coconut value chain.

‘’Ghana has come far in terms of its cocoa production from the days where coconut is seen as an ordinary plant with limited varieties, the disease-ridden plant with no investment potentials, coconut production in Ghana is now a competitive and sustainable economic venture with increase in production’’ said.

Mr. Korboe thanked all stakeholders within the industry and encouraged them to continue working together to make the coconut industry a success.

Other personalities present at the opening ceremony were the Western regional minister, Hon. Kwabena Okyere Darko-Mensah, CEO of Free Zones Board, Mr. Mike Oquaye Jnr., representatives from the Ministry of food and Agriculture, Trade and industries among others.

Police investigate drowning of officer at Sefwi Amoaya
27 minutes ago