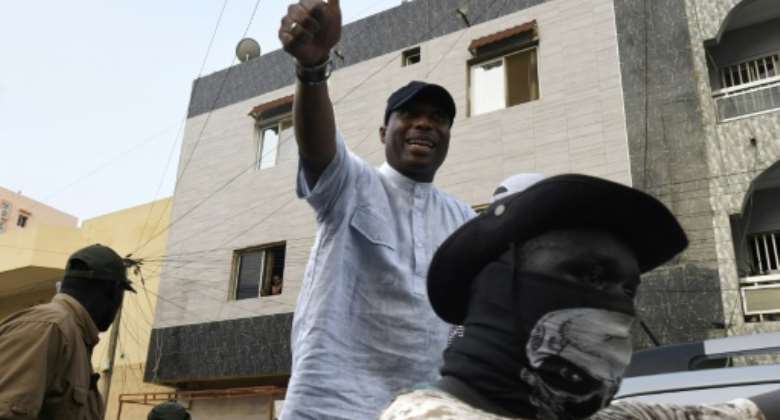 In a politically-charged case, a Senegal court upheld a six-month prison term and 18-month suspended sentence against mayor of Dakar Barthelemy Dias. By SEYLLOU (AFP/File)

A Senegalese appeal court on Wednesday confirmed a prison sentence handed down to the mayor of Dakar, convicted of killing a man during a wave of political violence.

In a politically-charged case that played out against a backdrop of tensions between the opposition and government, the court upheld the six-month prison term and 18-month suspended sentence.

The court "confirms the judgement in all its provisions, dismisses the civil party in all its requests", the presiding judge said.

Dakar Mayor Barthelemy Dias, a fierce opponent of President Macky Sall, had sought to overturn the sentence for the 2011 killing of a wrestler named Ndiaga Diouf during a rally that turned violent.

Dias, 46, was elected city mayor in February, riding a wave of support for leading opposition figure Ousmane Sonko, and there is speculation that he himself has presidential ambitions.

Police deployed in and around the courthouse and anti-riot vehicles were placed at key intersections of the capital.

"The battle continues, it's a battle of principles that has nothing to do with politics," Dias' lawyer Demba Cire Bathily told AFP outside the Dakar courthouse.

Bathily said he would advise his client to lodge an appeal.

"The major implication is that his mayoral mandate isn't threatened," the lawyer said.

The implications for Dias' mandate as a parliamentarian were not an issue since "the decision isn't final", he added.

Dias was sentenced in 2017 to a six-month prison term and 18 months' suspended in a trial in which he appeared alongside a dozen other defendants.

His appeal began in March after having been postponed several times.

Ndiaga Diouf was shot dead in 2011 during an assault on the town hall of Mermoz Sacre-Coeur by suspected supporters of the ruling Senegalese Democratic Party.

When the long-delayed appeal was finally heard in March with only two defendants, Dias pleaded self-defence and denied he was the only shooter.

The political standoff has been tense since March 2021. By SEYLLOU (AFP/File)

Prosecutors had asked for five years.

Such a sentence would have been likely to provoke violent protests from his supporters.

The political standoff has been tense since March 2021, when Sonko's indictment for rape sparked days of riots that left at least a dozen people dead.

Senegal, often seen as an island of stability in west Africa, saw fresh clashes in June that left several people dead after a list of opposition candidates was invalidated in legislative elections on July 31.

The elections left Sall with a minimal parliamentary majority and a considerably strengthened opposition.

The bickering and invective that followed the opening of parliament last week amid unprecedented security measures presages a worsened relationship between the legislature and the executive.

The uncertainty surrounding Sall's candidacy for a third term is weighing on Senegal's politics.

We haven’t rejected Justices Gaewu and Koomson – Appointment...
54 minutes ago

Stop the wrongful, multiple sale of lands — Akufo-Addo to ch...
54 minutes ago