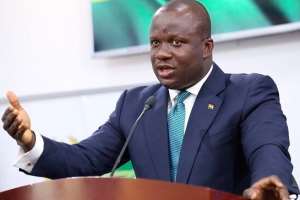 The Minister in charge of Lands and Natural Resources, Samuel Abu Jinapor has disclosed that facts in front of him suggest that Aisha Huang will be found guilty of charges preferred against her.

The galamsey kingpin has been slapped with several charges including illegal mining and trading minerals without a valid license.

Speaking to journalists in Accra, Samuel Abu Jinapor has said he is convinced Aisha Huang will be prosecuted and thrown into jail.

Indicating clearly that he was not making a prejudicial statement, the Lands Minister notes that his optimism is backed by the facts.

“Aisha Huang has been arrested today. She is being prosecuted and she will be prosecuted under Ghanaian law in Ghanaian court if she is found guilty which I believe she should be found and I think I am not making prejudicial comments but I am saying that given the fact that I have, I am expecting that Aisha Huang will be found guilty, convicted and sentenced and thrown into Ghanaian jail,” Samuel Abu Jinapor indicated.

He further assured that besides Aisha Huang, any other foreigner caught engaging in illegal mining in the country will be arrested and prosecuted in accordance with the law.

Just days ago, some 154 foreigners were arrested for their involvement in illegal small-scale mining some of whom were identified to be Togolese and Burkinabes.

Where are DISECs in this whole galamsey brouhaha – Otumfuo q...
54 minutes ago