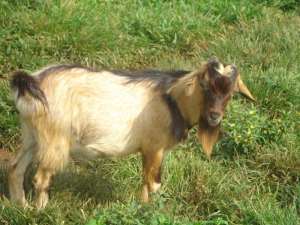 The Eastern Regional Police Command has arrested a chop bar operator and two other accomplices for stealing a goat.

The suspect, Mary Yeboah, 37, a local chop bar operator at Nkurakan in the Yilo Krobo Municipality was arrested by the Nkurakan Police, after she was caught in the act.

The accused, as well as other goat thieves, were paraded around town with their stolen animals by the angry residents.

They were booed and despised on the streets of Nkurakan as they were forced to carry the dead goats on their heads walking on the street before being sent to the Nkurakan Police station.

They were immediately transferred to the Koforidua Central Police Command for further investigation and prosecution.

Meanwhile, the high rate of theft and crime in Nkurakan is getting out of hands as the residents have petitioned the Regional Police Commander to send more men to the town to restore peace.