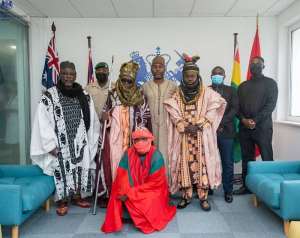 The Greater Accra Zongo Chief, Sarki Yahya Hamisu Baako on Thursday, September 15 joined foreign dignitaries and other prominent Ghanaians to pay tribute to the late Queen of England Her Majesty Queen Elizabeth II by signing the book of condolence in her honour.

The Accra Zongo Chief signed the book of condolence at a brief meeting which was specially arranged between the palace and the British High Commission in Accra.

The spokesperson for the Greater Accra Zongo Chief, Emir Sharif Adam (Sarki Gadafi) in an interview with the media revealed that the people of Zongo have a good and vibrant relations with the British government since the Gold Coast era.

According to him, due to the strong relations between Mallam Naino the grandfather the of the current Zongo Chief, Sarki Yahya Hamisu Bako and Governor Ursha, a land was secured and was named Ursha Town Zongo.

He added that the British governor in 1907 played a key role in securing a land for Mallam Naino and his people to migrate from Ursha Town Zongo to Sabon Zongo.

The relationship between the two therefore required that the Greater Accra Zongo Chief express his condolences in honor of the late Queen for the role her governor played in the establishment of one of the oldest Zongo communities in Ghana.

He appealed to his Royal Majesty King Charles III to continue with the good work of the late Queen Elizabeth II and strengthen the relationship between Ghana and other Africa countries.

Come out and declare your commitment to fight against galams...
27 minutes ago