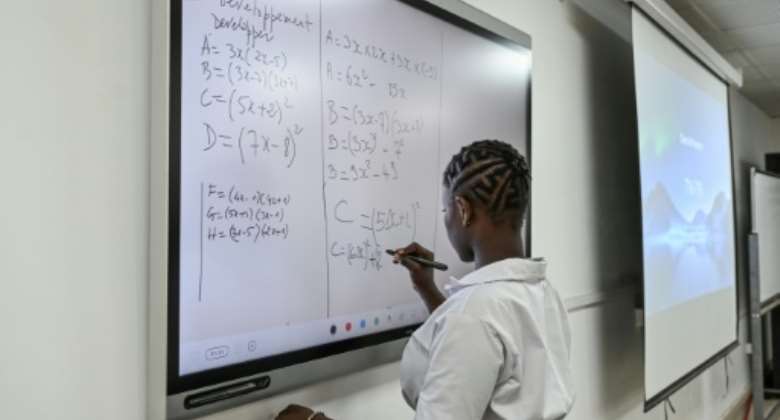 Any pupil with an unacceptable grade would be prohibited from pursuing their studies. By Sia KAMBOU (AFP)

Youngsters in Ivory Coast return to school this week with a sword of Damocles above their heads: those with average grades of less than 8.5 out of 10 will be excluded at the end of the year.

The measure is an old one brought back by authorities in the hope of raising the general standard of education in the west African country -- prohibiting any pupil with an unacceptable grade from pursuing their studies.

In the working-class district of Adjame, at the heart of the commercial capital Abidjan, the rule stirs comment at small stalls selling school supplies, where people also exchange secondhand textbooks.

"What are we going to do with the students who will be excluded? It's too drastic!" exclaims Mariam Eid, a mother of three.

"We're going to turn them into bandits. We want the teaching to be up to par, but one step at a time," she adds, while making sure a worn mathematics book has no missing pages before she buys it.

But at the Pierre Amondji college in Adjame -- where the motto "Who seeks perfection obtains excellence" is displayed in capital letters on the walls of the courtyard -- the measure is generally well received among the students.

"I find it positive," says Djenebou, who is taking the baccalaureate school leavers' exam at the end of the year.

Some students worried the move could lead to students being blackmailed by teachers for good grades. By Sia KAMBOU (AFP)

"It will incite us to redouble our efforts and work harder."

"It's a good measure. The goal is to improve our knowledge so we move on with solid training," adds his classmate Seydou.

But Seydou also hopes the regulation will not encourage fraud, and in particular the blackmailing of students by certain teachers in exchange for good exam grades.

"Some teachers are difficult... The marks are very low and to move on to the next class we have to negotiate with them," the young student says.

The minister of national education, Mariatou Kone, who is seeing in the second new school year of her time in office, defends a regulation that is far from universally welcomed.

"This is a measure that has existed since the 1970s and that we are restoring to encourage students to work and fight against mediocrity," she tells AFP.

"Students will not be barred from the school system. There are bridges between technical education and vocational training," Kone adds, keen "to reassure parents".

Officially state schools are free but the price of uniforms, satchels and supplies can quickly strain budgets. By Sia KAMBOU (AFP)

The minister says students who don't get the grades will not follow the standard curriculum, but they will be able to learn a trade or different skills.

"We must not leave anybody aside. The state must redirect these students to training in other trades," insists Claude Kadio Aka, president of the Organization of the Parents of Pupils and Students in Ivory Coast (Opeeci).

"All our children are useful in the development of the country," Aka declares.

Minister Kone stresses the aim of the reform is "to raise the standard" of Ivorian schools and to give diplomas their full worth.

In the past two years, the success rate for the baccalaureate has hovered around 30 percent, compared with 45 percent in previous years.

"Our children are in advanced classes and don't even know how to write an elementary sentence," protests Christelle Okingni, who has four children in school and welcomes the initiative.

But the "measure of averages" will not suffice to improve a school system which is sorely lacking in resources.

It is not uncommon in Ivory Coast to find classrooms with 60 or even 80 pupils. By Sia KAMBOU (AFP)

"Students regularly rise up to denounce the lack of classrooms and desks," points out a teacher of French from an establishment in Bouake, the country's second city, who prefers to remain anonymous.

It is not uncommon in Ivory Coast to find classrooms with 60 or even 80 pupils, while a lack of teachers sometimes cuts short the school year by several weeks.

"Last year, we had a mathematics and physics teacher only after the first term, it's not good for us students," laments Aya, a middle-school pupil at a college in Bouake.

The matter of school fees has arisen more than ever at a time when worldwide inflation is not sparing low-income households in Ivory Coast.

Officially, Ivorian state schools are free, but the price of uniforms, satchels and supplies can quickly put a strain on the family budget -- not to mention illegal registration fees sometimes requested by certain establishments.

Last week, the government announced a free distribution of six million textbooks and 5.3 million kits of classroom supplies, as well as the provision of 167,000 tables.