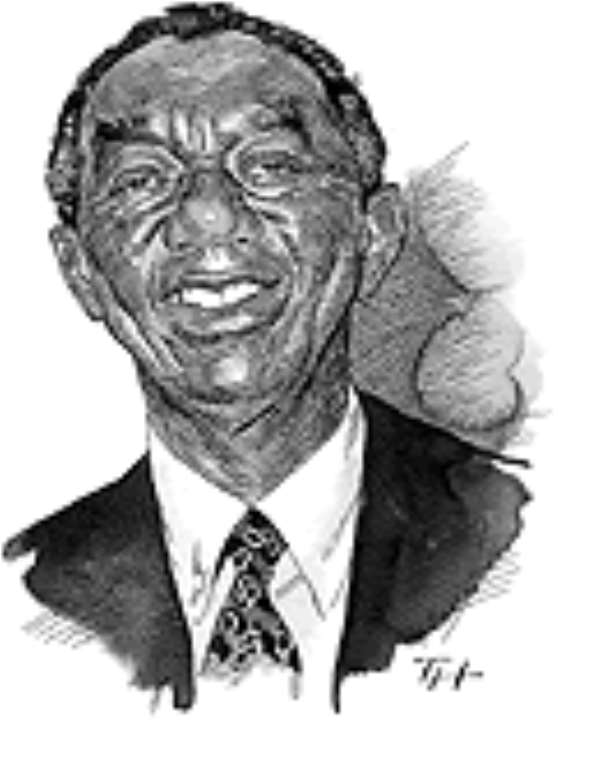 Countrymen and women, loyalists and opponents, I am amazed that after five years in power, the subject of my travels and tours continues to provide fodder for heated arguments across Sikaman. I like traveling. How many times do I need to repeat that for you to accept me for who I am? As long as I remain the excellent one, I will continue to travel. My intention is to travel to every single country on this planet before I step down from the Black Star Stool. Please get used to the fact that my travel habits are not going to change before 2008. The earlier you get used to them, the better.

I must say that often times, I have no reason to travel. I just like to travel and I jump on a plane at the least opportunity. But I have made sure that I never travel without an excuse. The first excuse is that we need to attract investors to set up businesses in our country. That's the best excuse we have, for now. So when I go to India, it's for investment. Have you seen the Indians who are setting up those IT companies in our country? They came because of my investment drive. When I go to Jamaica, it's for investment. They will come and invest in our reggae music. Just mark my words. In the next few years, Sikaman musicians will be more known for their reggae music and not highlife (or hiplife). The Sri Lankans are coming. The East Timorese will be here soon. Thanks to my efforts we are even getting investors from the Comoros. I don't enjoy begging people to come to our country to invest. It's so annoying when I have to meet some lowly 'business executive' in, say, downtown Washington to beg him to come to my country to invest. Most of the business executives I meet will not even be allowed to polish the Bushman's shoes. But we need money so I beg anyone who has a few thousand dollars to spare. It's so demeaning. But I have to do it anyway. That's why I take consolation in the other (more personal) benefits of traveling. Sometimes, I travel for inspiration. I got the idea for presidential special initiatives during a trip to Malaysia. It was there that I realized our farmers need to produce more cassava – not just for fufu and 'konkonte' but also for industrial starch. If I hadn't been to Malaysia, there wouldn't have been any ministry for presidential initiatives, which is overseeing my pet projects in textiles and palm nut cultivation. Very soon I am going to set up special initiatives for grasscutter rearing and “aponkye nkraakra” for export. I got these ideas abroad. Let me be honest with you. Sometimes, it's difficult for me to think like a man with a head when am in Sikaman. You people talk too much. When I wake up in the morning, I only hear radio presenters screaming their heads off, claiming to be 'discussing' pertinent issues. What I hate most is when they “open the phone lines” for people to insult me and say all sorts of things about me. Being out of the country therefore helps me to think and think well.

That's not all, when I travel and, by God's grace, I come on CNN or receive coverage on the Internet, it helps put our country on the world map. Just take my visit to Washington for example. I wasn't originally scheduled to meet the Bushman. But God indeed works in mysterious ways. The man was having his own presidential challenges and needed to deflect attention. So what did he do? He invited me over to the oval office for a cup of coffee. It was one of the most pointless meetings I've ever had with a colleague president. He didn't have anything to say and I also didn't have much to discuss. So we just sat in front of the fireplace, sipped our coffee and later we posed for the cameras. Am so unhappy with one of the pictures. In it, the Bushman is grabbing my hand as I like a little child on a potty. But that's not important. The most important thing is that I met with the Bushman and we had our pictures all over the Internet. For a whole day, my name was on radio and TV bulletins in most parts of the world, giving our country some “shout-outs” in the most prominent international media.

So my travels ultimately benefit Sikaman. That's why I am baffled that not only are you criticizing me for doing what I love to do. But you are also questioning the wisdom in my decision to stay in what some people see as an expensive hotel. I don't think that you expect your president to stay in a bed and breakfast, do you? When the president of Papua New Guinea comes to Sikaman, he would stay at La Palm or M-Plaza. He will not lodge at “Obia Se Eye” Hotel Kantamanto. I think that those who are claiming that we are living in luxury at the Willard Intercontinental are suggesting that we should stay in Washington's equivalent of “Obia Se Eye” Hotel. What will that say about me and about our country? We are poor but not cheap. If the president of famine-stricken Niger can stay in the Willard Intercontinental, why can't I do the same? Do you think that if I had stayed in some run-down bed and breakfast in Washington, the Bushman would have invited me over to his office for a cup of coffee? No! In a classic Sikaman fashion most of you have missed the point.

Instead of ranting and raving about the hotels I lodge in, I will advise you to rather scream and shout about the large number of people I travel with. Sometimes, I question the wisdom in traveling with a huge delegation of about 70 people. It doesn't make sense, I know. But I am often pressured to travel with all these people – most of whom do not serve any useful purpose. They just come along for sightseeing. But I have no control whatsoever about who comes with me. It's the responsibility of Presidential Travel and Tours – a special unit at the Castle. They just sometimes put people on the plane to reward them for their loyalty to the party and to the government. Criticize them and if they are wise, I know they will amend their ways.

A couple of weeks ago, I wrote about the issue of per diem allowances. It also attracts a lot of people to travel with me. You should not allow this issue of my lodging in a glitzy Washington hotel to muddy your focus on the substantive issue of the foolishness in the payment of per diems to government delegations abroad. Continue speaking out against it and demanding exact true figures. It might tarry but change shall come. It might not be positive, though.