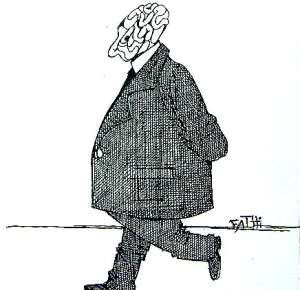 Part 1 Of 2 This brain drain issue will never die unless and until somebody takes leadership responsibility to care for the people who aspired for higher education, and the society in which they are to serve. Usually very smart students pursued very rigorous disciplines of professional studies from high school through University, passed tight and competitive entry requirement, and spent several years obtaining higher professional education. African leaders should stop kidding themselves. No such man or woman, after going through these competitive educational curricula feeds their families on peanuts and patriotism alone! Does any of these leaders really understand and care for their countries?

It is doubtful. This report card on Ghanaweb of October 29, 2005 is not that great. “A World Bank study on census and population published on Monday in a book titled “international Migration, remittances and Brain Drain,” says 47% of Ghana's college-educated citizens were living abroad.” Despite Ghana's constant bragging of being among the best, or sometimes even being the best in Africa, facts are that this is not true anymore. The report continues:

"In contrast, large developing countries such as China, Brazil, India and Indonesia have lost less than 5% of their skilled citizens to OECD. Moreover, the recent return traffic is bringing back intellectual and financial resources to these countries".

Folks, if you think you are the best and your educated folks cannot survive in the country, and all you can do is increase taxes on them, milk them to the bone, and live on remittances from those overseas, you are living in a dream world. Ghana's GNI/capita has dropped from $400 at Independence [1957] to current levels of $320. We have actually fallen behind. This writer blames these on reckless armed bandits who become rulers, and then selfish unethical leaders!

JOBS, JOBS, JOBS! The bottom line about brain drain is high paying professional, technical as well as other decent paying jobs! Period! Recently on September 4, 2005 Ghanaweb reported an article entitled “Brain Drain Shuts down TOR”, 14 engineers at the Tema Oil Refinery were resigning, having been offered jobs paying more than 10-15 times their pay in Ghana. The Minister, one Professor Ocquaye, attributed this attrition to the Devil, and asked for prayers. In other countries such men would have been asked by the President to resign! In Ghana we have a proverb in Twi that says if a person assumes he is smarter than everybody on earth, he ends up saying Hello to “odwan” the sheep. First premier Nkrumah wanted educated people to go back to the land to farm, but most farm areas do not have roads, electricity, phone lines or water supply. No educated person did in the 1960s. Today the MPs in the Kufuor administration want the taxpayer to give them free money as they gave themselves free cars, so they can own 100acres each to farm. They might as well say Hello to “odwan”. Ghanaians are not going to stand for this public thievery anymore.

The LIVING WAGE and Competitive PAY: The point at issue is that the Presidents of Ghana and their Ministers and the MPs have for too long used the policies of envy, and only thought of their personal well being. They have all the benefits that amount to several thousand dollars per month, plus per diem travel allowances, and when they hire Ghanaians with MDs, PhD, MS or BA degrees for the same jobs an American or European, they want them to work for peanuts [an American expression meaning next to nothing]. At the same time they would pay the European and Americans and other foreigners ten times the salary to work in Ghana. Nobody's mother raised them as dummies! We only invite corruption when we pay people below their dignity and educational qualification level. There is no developed nation where politicians are the highest paid. A national policy must be re-framed such that that people are paid according to their skills and number of years in school and experience, and according to what they produce. If we want to sell our goods such as petrol at the global market levels to our citizens, and purchase expensive vehicles for politicians or government executives, this writer strongly recommends for Ghana to put all these benefits such as housing, vehicles, house renovations, petrol, travel and other allowances, into competitive salaries for all. For the lower levels, it is the duty of our President and his Cabinet and Parliament to work out a LIVING WAGE for all workers and adjust them according to inflation rate. It can be done, and this writer, as President of Ghana Leadership Union, will volunteer to put a team together to come out with a solution.

Perhaps we should try and see if we can give some credit to the NDC and the NPP in the last decade. After the NPP came into powers in 2001 they made an attempt of some kind by calling for what they called HOME-COMING SUMMIT, in which many professional Ghanaians from around the world gathered together in Accra and had a blast! It was reported in the news media for sometime, but that was the end of it. I also know that Mr. Asamoah Boateng (alias Asabee) was put in charge of a section of the President's office staff supposedly to help returning Ghanaians. This policy I understand was formulated by the NDC government but never implemented and the NPP was continuing it. I am an optimist and not one of those doomsday Professors. Even though I wrote in 2001 that this Home Coming Summit was not the way to solve the problem, I know Hon. Asamoah Boateng made an effort. I strategic management, we know that good effort with the wrong strategy never achieve the end goals.

Like everything in life, leadership vision must be made very clear, focused and with dedicated honesty and persistence, and well planned with the resources and good communication of the effort. Nation building is not an easy task in any country, and potential leaders must all be cautioned and learn from the previous mistakes of nations like Ghana. We cannot take our people from granted until we assume power and promise to continue what Nananom Danquah, Busia or Nkrumah did, many of which seem not to have worked so far. I am not blaming these fine men, but Ghana's inability to move forward comes from our leaders' greed, as well as lack of skills. They just don't learn the new tricks of technology, customer needs, and globalization. Some Professors are teaching of going back to what things used to be in the pre-colonial days. However such teachers usually reside in the West. Politicians still fool rural people with bags of salt and matches during elections. An accumulation of poor leadership includes greed, lack of skills [also called incompetence], stubborn refusal to change and adapt, leading Ghana to this sad state of depravation and at the bottom of most economic and Human Development Indices. We are getting loans and grants but can't figure out how to use them, paying $30 Million for projects that should not cost $3 Million. We started out of colonialism at the same levels as nations like Singapore, Malaysia and Korea in 1957. What happened?

Let's ask: What happened to Ghana? [To be continued] Kwaku A. Danso, President, Ghana Leadership Union, Inc. (NGO) www.GhanaLeadership.com Fremont, California, US & Accra, Ghana Views expressed by the author(s) do not necessarily reflect those of GhanaHomePage.