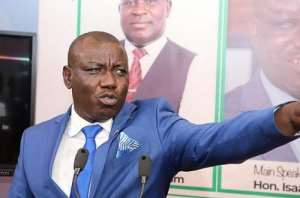 The Member of Parliament (MP) for Bolgantanga Central, Isaac Adongo says the ruling New Patriotic Party (NPP) government should be ashamed for taking the country to the International Monetary Fund (IMF).

According to him, no amount of excuses will clear the fact that Covid-19 and the Russia-Ukraine war have little to do with the mismanagement of the Ghanaian economy.

Speaking to Citi News in an interview on Monday, September 19, the Deputy Ranking Member on the Committee of Parliament in charge of Finance accused government of conniving with the IMF to dispute the fact that the Covid pandemic and the Russia-Ukraine war are not the cause of the hardships in the country.

The Managing Director of the International Monetary Fund (IMF), Kristalina Ivanova Georgieva-Kinova, earlier this month attributed the current economic woes facing Ghana to external factors such as the Russia-Ukraine war and the COVID-19 pandemic.

Speaking to the media on the sidelines of the Africa Climate Change Adaptation Summit in the Netherlands, she said the economic woes of West African country is not due to bad policies.

“We have started very constructive discussions already and, to the people of Ghana, like everybody on this planet, you have been hurt by exogenous shocks.

“Firstly, the pandemic, then Russia’s war in Ukraine. We need to realise that it is not because of bad policies in the country but because of this combination of shocks, and, therefore, we have to support Ghana,” Kristalina Georgieva explained.

Reacting to that and the conversations that ensued, Isaac Adongo says no magnitude of PR by the IMF Managing Director will help government officials to change the real facts of the matter.

“I want to say that the NPP should bow its head in shame that it has brought us here and wants to us PR and connive with the IMF. The truth is they have mismanaged the economy,” Isaac Adongo stressed.

The Bolga Central MP continued, “the IMF has a dossier on Ghana’s economy that they have consistently told us even up to 2019 that the economy was heading in the wrong direction. That cannot change with the visit of the Finance Minister to the Managing Director of the IMF.”