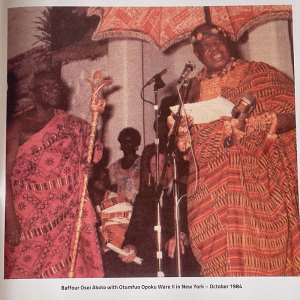 I sat at his feet years ago doing my doctoral research on indigenous rhetoric. It was 1984 and beyond.

I first met Okyeame Baffuor Akoto at the Manhyia Palace, and instantly fell over for his roaring baritone voice that lit the palace skies at court sittings Tuesdays and Fridays. Who was this man? A senior okyeame, I was told. I got nearer him, and from my personal encounters got a deeper understanding of the aura surrounding Manhyia and the Ashanti. It is partly men of his caliber, learning, and charisma, that define the majesty and plumage of Otumfuor. Today, I honor him because, he has a word or two I can recall to censor traditional and contemporary leaders sabotaging the war on galamsey. Baffuor passed on in 2002, having served three successive Ashanti kings as okyeame.

It was at court hearings in Manhyia that Baffuor was at his best: an encyclopedia, teacher, philosopher, counsellor, prosecutor, diplomat, royal spokesman, resident historian: a proud gladiator of custom and tradition. A man to be feared also because he was a lion on the prowl, gallantly protecting the Ashanti heritage around the clock, pouncing on deviants and defaulters, naming and shaming.

Listening to him several times as a student of rhetoric, I walked away with an amplified ego, nodding at the indigenous wisdom that ignites Ashanti and rubs on Ghana as a whole. Idioms and proverbs Baffuor bellowed at court sittings, filled the palace and were a lamp unto the feet of new traditional rulers, those just sworn in, including novitiates fumbling on the stool. His wisdom and Manhyia as a whole, enriched my doctoral and post-doctoral research. No wonder the outcomes broke barriers: one manuscript on proverb rhetoric winning the 1985 dissertation of the year award at Indiana University; and a book on Okyeame clinching the Gold Book award by the Ghana Academy of Arts and Sciences in 1997. Happily I got the opportunity to narrate to Otumfuor Osei Tutu II, the role of Manhyia in my academic life in 2021, the day after I received a Millennium Excellence award in Kumasi. The Manhyia institution is a national heritage we should jealously guard.

Casting my mind back, I am fully convinced that Baffour’s vision alone could mobilize farmers, chiefs, and traditionalists to turn their guns on vandals of our natural environment. His vision would rule out chiefs as possible accomplices in the shameful assault on the environment. One of Baffuor’s favorite proverbs, keeps echoing in my ears, on hearing the possible involvement of chiefs, political gurus, ministers and political giants in the facilitation of galamsey. In one case at Manhyia in 1984 the revered Baffuor Akoto was compelled to ‘boom’ a powerful proverb directed at a fumbling elder, who had bullied his way cultivating a piece of land outside his legal mandate. The traditional court had found him guilty; but just before the case ended, the legendary Okyeame Akoto pleaded that the gentleman’s offence should not be taken lightly because, he was a former lineage head, a respectable elder who should have known better. Baffuor cleared his throat that day, and with a ferocious voice thundered the following proverb during his submission:

The forest bird may be pardoned for not knowing that rice is edible grain;

Bird of the grassland cannot be similarly forgiven.

The faulting man is an elder and should have known better, said the okyeame.

Those words sealed the Manhyia verdict as the sky glowed lifting high the flag of Otumfuo’s Ashanti.

The message was simple: an elder of the caliber of a former lineage head should have known better, being the lord of customary norms.

Baffuor’s precious proverb should be the guiding light for chiefs, political leaders and all who lead the unfortunate assault on the environment. Nananom are guardians of our natural heritage, sentinels, indeed the frontline gladiators of nature.

Years gone by, the farmer would lead the fight in preserving the environment, and promoting self-renewal. He would harvest palm fruit and not leave the farm until he had sliced a fragment of the bunch, and thrown this back into the wild. The ignorant colonialist mistook that to be idol worship. The venerable fisherman knew likewise; after a rich harvest, he would throw back a handful into the high seas before returning home. The farmer was a reliable agent of bio-diversity, and the regeneration of the natural habitat. Depletion of the environment by the farmer or fisherman, was an anathema; unthinkable. If the farmer goes astray, mankind has betrayed nature.

The pristine dance of okomfo the priest is on the decline (akom ko); leaving the field for counterfeit priests that merely twirl around in raffia skirt.

Let’s indeed bring traditionalists and the House of Chiefs over as front liners in the fight against galamsey, educating the ignorant about the vision of Baffuor Akoto on leadership.

But allow me now to upload one rare incident I observed at the Manhyia palace during my research, while sitting at the feet of Baffuor Akoto, my teacher.

All was quiet that day as the traditional praise singers, abrafo, took turns and stood before the great king solemnly chanting royal praise applauding the king. The high sounding praise was awe inspiring, and came down tumbling on the congregation of chiefs, litigants, elders, and the general public. In response to this, one would have expected an overwhelmed king, beam with smiles and gloat in self-satisfaction. No. Not the King of Ashanti. I shifted my gaze and camera on him, and was puzzled to see the King pick a handkerchief and wipe tears from his eyes. Tears came rolling down his cheeks as he listened to poetry in his praise. What was happening?

I posed the question to my teacher, and got an overpowering response.

The King was weeping, because the praise reminded him of the great deeds of his ancestors. It was a solemn moment for him; a humbling capsule of history; but also a moment of self-appraisal, a reflection on his own profile and possible limitations. Am I preserving and uplifting the vision of my forebears? Have I lived up to expectation? Do I deserve praises the stool has accumulated over the years? The sobbing King was indeed enacting the greater emphasis tradition puts on responsibilities of leadership, and NOT privileges.

Thanks to the vision of Ashanti and Baffuor Akoto; this should be a lesson to all leaders of our time using power to accumulate privileges.

But Baffuor’s powerful vision should also humble us the educated elite to respect customs and traditions we brazenly disparage.

Baffuor Akoto for all his achievements, was non-literate. He never went to school, he told me. Let me quote here his own words years ago as I sat at his feet at Manhyia. “My father did not take me to school. My father said, if I went to school, I would die an early death. Me papa se, meko sukuu a, mewu ntem.”

No wonder the visionary, one of Ghana’s greatest legends Baffuor Osei Akoto, died at 98.

After all we are all birds of the savanna grassland.

Former Minister of State in charge of Tertiary Education

Hottest Photo Reports
Catch up with all the political quotes from our politicians.
Advertise here
More from Article
ModernGhana Links
6 priorities to get Kenya's curriculum back on track – or risk excluding many children from education
Sex for fish, a reality fueled by growing economic hardship in Ghanaian fishing communities
The 'Nkabom' budget is full of hope for Ghanaians
TOP STORIES