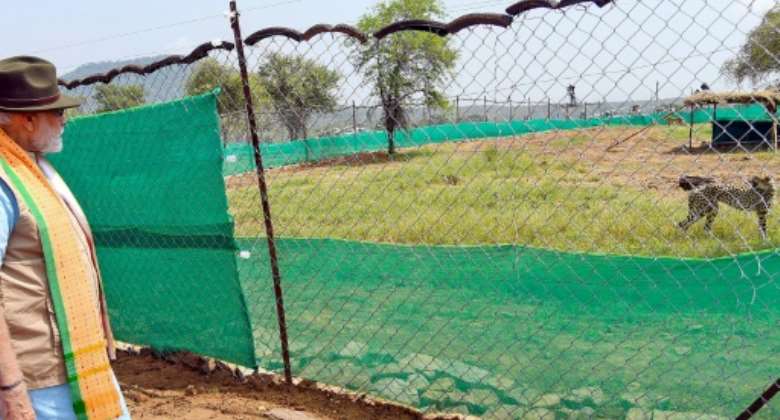 Eight Namibian cheetahs arrived in India on September 17, decades after their local extinction. By - (PIB/AFP)

Eight Namibian cheetahs arrived in India Saturday, decades after their local extinction, in an ambitious project to reintroduce the spotted big cats that has divided experts on its prospects.

The five females and three males were moved from a game park in Namibia aboard a chartered Boeing 747 dubbed "Cat plane" for an 11-hour flight.

"Today the cheetah has returned to the soil of India," Modi said in a video address after their arrival, which coincided with the leader's 72nd birthday.

"The nature loving consciousness of India has also awakened with full force," he added. "We must not allow our efforts to fail."

Each of the animals, aged between two and five and a half, have been fitted with a satellite collar to monitor their movements.

They will initially be kept in a quarantine enclosure for about a month before being released in the open forest areas of the park.

Critics have warned the creatures may struggle to adapt to the Indian habitat.

A significant number of leopards are present in the park, and conservation scientist Ravi Chellam said that cubs could fall prey to feral dogs and other carnivores.

Under the government's current action plan, "the prospects for a viable, wild and free-ranging population of cheetahs getting established in India is bleak," he told AFP.

"The habitats should have been prepared first before bringing the cats from Namibia," he added. "It is like us moving to a new city with only a sub-optimal place to stay -- Not a nice situation at all."

But organisers are unfazed.

"Cheetahs are very adaptable and (I'm) assuming that they will adapt well into this environment," said Dr Laurie Marker, founder of the Namibia-based charity Cheetah Conservation Fund (CCF), which has been central to the project logistics.

India was once home to the Asiatic cheetah but it was declared extinct there by 1952.

Officials say the project is the world's first intercontinental relocation of cheetahs. By - (PIB/AFP)

The critically endangered subspecies, which once roamed across the Middle East, Central Asia and India, are now only found, in very small numbers, in Iran.

Efforts to reintroduce the animals to India gathered pace in 2020 when the Supreme Court ruled that African cheetahs, a different subspecies, could be settled in India at a "carefully chosen location" on an experimental basis.

They are a donation from the government of Namibia, one of a tiny handful of countries in Africa where the magnificent creature survives in the wild.

Negotiations are ongoing for similar translocation from South Africa, with vets suggesting 12 cats could be moved.

Cheetahs became extinct in India primarily because of habitat loss and hunting for their distinctive spotted coats.

An Indian prince, the Maharaja Ramanuj Pratap Singh Deo, is widely believed to have killed the last three recorded cheetahs in India in the late 1940s.

One of the oldest of the big cat species, with ancestors dating back about 8.5 million years, cheetahs once roamed widely throughout Asia and Africa in great numbers, said CCF.

But today only around 7,000 remain, primarily in the African savannas.

The cheetah is listed globally as "vulnerable" on the International Union for the Conservation of Nature (IUCN) Red List of Threatened Species.

In North Africa and Asia it is "critically endangered".

Their survival is threatened primarily by dwindling natural habitat and loss of prey due to human hunting, the development of land for other purposes and climate change.

We haven’t rejected Justices Gaewu and Koomson – Appointment...
44 minutes ago

Stop the wrongful, multiple sale of lands — Akufo-Addo to ch...
44 minutes ago