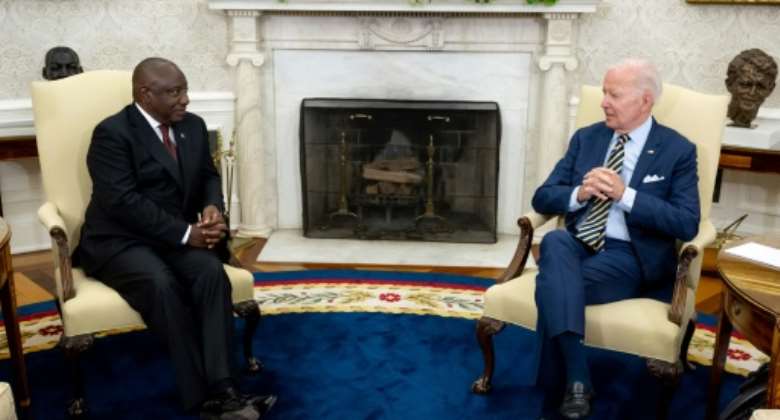 US President Joe Biden meets with South African President Cyril Ramaphosa in the Oval office of the White House. By SAUL LOEB (AFP)

South Africa's leader on Friday agreed to cooperate closely with US President Joe Biden on health, security and climate but warned against punishing African nations for maintaining ties with Russia.

The Biden administration has put a new focus on Africa after being taken aback by the reluctance of some nations to condemn Russia over its invasion of Ukraine, which has triggered sweeping Western sanctions.

President Cyril Ramaphosa enjoyed unusually warm treatment from Biden, who walked him back to his motorcade at the White House, weeks after Secretary of State Antony Blinken traveled to South Africa and promised that the United States will listen more to Africans.

"We really need to make sure we fully understand one another," Biden said as he welcomed Ramaphosa in the Oval Office. "Our partnership is essential."

Ramaphosa said he sought to work together on security, including in South Africa's troubled neighbor Mozambique, as well as on climate change, a key priority for the Biden administration.

Starting his visit over breakfast with Vice President Kamala Harris, Ramaphosa voiced gratitude to the United States for its "considerable support" on the Covid pandemic as the Biden administration donates 1.1 billion vaccine doses around the world.

"The visit really is about strengthening the relationship between South Africa and the United States," Ramaphosa said, adding that Washington had a "key role" to play on security across Africa.

But Ramaphosa warned Biden over a piece of legislation that has passed through the US House of Representatives which would require a strategy to counter Moscow's role in Africa.

US Vice President Kamala Harris welcomes South African President Cyril Ramaphosa to her residence at the US Naval Observatory. By Jim WATSON (AFP)

Ramaphosa said he explained that Africans should not be "punished" for their historic non-aligned position among major powers.

"I think it will harm Africa and marginalize the continent," Ramaphosa told reporters after his meetings.

"We should not be told by anyone who we can associate with."

The legislation, called the Countering Malign Russian Activities in Africa Act, has yet to clear the Senate and US policymakers stress that it does not in itself lay out any repercussions for African countries.

Successive US administrations have focused much of their energy in Africa on countering the growing influence of China, which has become the continent's dominant trading partner.

But Russia's invasion of Ukraine has triggered a new front in the battle for influence in Africa, where many nations have been reluctant to embrace the West in its campaign to pressure Moscow.

South Africa's Foreign Minister Naledi Pandor denied being neutral but said "there are reasons for the perspectives that exist and one should never, I think, try to pretend that there aren't histories."

Ukrainians living in South Africa demonstrated in the summer of 2022 in front of a Johannesburg hotel where a Russian business delegation was staying. By MARCO LONGARI (AFP/File)

"I think we've been fairly clear, in our view, that war doesn't assist anyone and that we believe the inhumane actions we have seen against the people of Ukraine can't be defended by anybody," she said this week at the Council on Foreign Relations in Washington.

The United States has sought to highlight the invasion's role in soaring food prices, as Ukraine was one of Africa's largest suppliers of grain.

Russia has sought to blame food scarcities on Western sanctions, an argument dismissed by the United States, which says it is not restricting agricultural or humanitarian shipments.

South Africa's top diplomat broke with the usual polite bipartisanship of foreign dignitaries visiting Washington, not mincing words on Biden's Republican predecessor Donald Trump, who notoriously referred to nations in the developing world with an epithet.

"We relate very well, I think probably better, with the Democrats than the Republicans," she said. "You will recall how President Trump described Africa and no one has apologized for that as yet."

Trump was the first US president in decades not to visit sub-Saharan Africa. Biden has not yet visited but has pledged a renewed interest, including with a summit of African leaders planned in Washington this December.