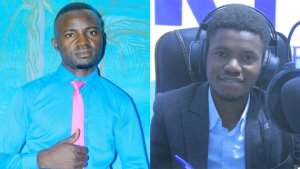 Congolese authorities should conduct swift and transparent investigations into the attacks on journalists Parfait Katoto and Picard Luhavo in their homes, hold those responsible to account, and ensure the safety of journalists working across the country, the Committee to Protect Journalists said Friday.

In separate incidents on September 6 and 7, armed men dressed in Congolese military uniforms forced their way into the houses of Katoto, director of privately owned community radio station Amkeni Biakato in the country’s eastern Ituri province, and Luhavo, a reporter with privately owned radio stations The Voice of Ituri and Mont Bleu, which are also in the Ituri province, and privately owned news website Monde 24 based in Kinshasa, the capital, according to the two journalists and Christine Abedito, Ituri chapter president of the National Press Union of the Congo known as the UNPC, who all spoke with CPJ by phone and messaging app. The armed men threatened the journalists with death, beat them, and confiscated their work equipment, according to those same sources.

“Congolese authorities should urgently investigate the separate attacks on journalists Parfait Katoto and Picard Luhavo by armed men who appeared to be members of the military and hold those responsible to account,” said Muthoki Mumo, CPJ’s sub-Saharan Africa representative, in Nairobi. “Journalists working in eastern Democratic Republic of Congo face enough dangers without worrying that soldiers from their own government may break down their doors and threaten to kill them.”

Katoto told CPJ that around 8 p.m. on September 6, two men carrying guns entered the compound where he lives in the city of Biakato while he was watching a football match with a neighbor and accused him of disseminating false information about suspected members of the Maï-Maï rebel group killing government soldiers during an attack on September 5, which another local radio station had reported.

Katoto says he told the intruders that he had not reported on the incident, but they threw him to the ground, stomped on him, and punched him. They also seized his two phones and 12,000 Congolese francs (about US$6). The men said they’d return to kill him if he distributed information deemed favorable to the Maï-Maï.

Katoto said he reported the incident to Selemani Salambongo Mbida, the city chief of Biakato, and that his lawyer had begun to prepare a complaint to be filed to the military’s judicial authority.

Separately, Katoto faced similar threats in May 2021, when armed men robbed and threatened to kill him in his home, accusing him of denigrating the Congolese military by broadcasting allegations that soldiers had looted properties in Ituri province.

Around 1 a.m. on September 7, in the Ituri provincial capital of Bunia, three armed men who wore military uniforms forced their way into Luhavo’s home, broke down his bedroom door, and demanded his laptop and external hard drive.

Luhavo told CPJ over the phone that when he told the gunmen his computer and hard drive were at his office, they “grabbed me by my clothes and beat me up badly.” Before leaving, the men took his phone. “One of them made it clear to me that they would come back again to get what they need” or kill him, Luhavo said.

Luhavo’s home was again broken into during the night of Monday, September 12. Neighbors told Luhavo they saw two armed men in military uniforms enter his house. Luhavo had not slept at his home since the attack, but said he found it ransacked when he returned the next day. Nothing was taken.

Abedito told CPJ that she took Luhavo to the police to report the incident and contacted a lawyer, who filed a complaint to police on Luhavo’s behalf on September 8.

Ituri Congolese military spokesperson Lieutenant Jules Ngongo told CPJ via messaging app that he was unaware of the attacks on Katoto and Luhavo and promised to contact them. Ngongo did not answer CPJ’s follow-up calls on Wednesday, September 14, and Friday, September 16.

The police officer investigating Luhavo’s case, who asked to be identified as Martinique, told CPJ by phone that police are investigating the incidents.