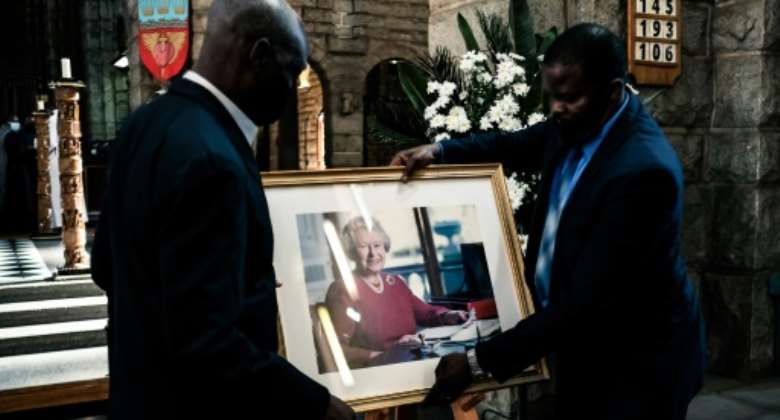 A portrait of the queen is placed on a stand ahead of a thanksgiving service at the Anglican Cathedral. By Jekesai NJIKIZANA (AFP)

On a chilly spring morning, a kilted piper playing the bagpipes led diplomats into Harare's stone-walled Anglican Cathedral for a thanksgiving service in honour of Queen Elizabeth II.

But the turnout among the public was meagre -- numbering in the dozens -- and the flags that flew at half-mast were in honour not of Zimbabwe's former monarch but of an army brigadier who had died a week after her.

Sentiments in this southern African country after the death of the queen are mixed.

Many of Zimbabwe's institutions, such as its parliament and bewigged judges, are based on the British model, and food, clothing and even accents are inspired by Britain.

Yet memories remain of the humiliation of the colonial era, tinged more recently by tensions under Zimbabwe's first post-independence leader, Robert Mugabe.

Older Zimbabweans grew up in a country called Rhodesia -- a British colony created and named after Cecil Rhodes, an ardent imperialist.

Britain's relations with Zimbabwe went downhill after Mugabe, seen here at a post-election inauguration ceremony in 2013, cracked down on dissent and seized land from white farmers. By ALEXANDER JOE (AFP)

Colonial relations "were exploitative," said historian Phatisa Nyathi. "It was about the looting of resources, minerals and a source of hostility."

In 1964, as British rule in Africa was fading, Rhodesia's white-dominated government unilaterally declared a republic, triggering a war with nationalists that ended with independence under negotiations fostered by Britain.

It was the queen's successor, King Charles III, who attended independence ceremonies in 1980, where he was handed the Union Jack after it was lowered and replaced by the new multi-coloured Zimbabwean flag.

For the first two decades after independence, relations between Britain and Zimbabwe were cordial, even warm.

Bathed in the glory of the struggle and its negotiated outcome, Mugabe in 1986 was awarded the highest royal honour granted to an African statesman, and several British universities showered him with honorary degrees.

When the queen visited Zimbabwe in 1991 for a Commonwealth summit, Harare city authorities burned down shacks in parts of the capital and moved the 3,000 dwellers to a farm out of sight of the visiting monarch.

But relations started to sour when Zimbabwe launched controversial reforms in 2000, kicking nearly 4,000 white farmers off the land, and Mugabe cracked down on dissent.

Zimbabwe found itself expelled from the Commonwealth, and its economy started to crater. Today, in a country of agricultural riches, many Zimbabweans are poor and hungry, and inflation is running at more than 250 percent.

Many Zimbabweans say they harbour a fondness for the queen, or at least disassociate her from the country's woes and its spat with the former colonial power.

A cleaner works under a portrait of the queen in the Bulawayo Club, a former gentleman's retreat in the Bulawayo, Zimbabwe's second largest city. By Zinyange Auntony (AFP)

"I will always remember her for her love and affection. She embraced every religion and loved everyone. I have never known anyone more loving," said Sandy Rowan, walking out of the memorial service.

"Her legacy continues in the name of a school, a hotel and a courtyard" in Harare, said Takavafira Zhou, a political scientist at Masvingo State University.

But others say that the queen's hands-off approach are precisely what was wrong.

"We don't feel compelled to mourn Queen Elizabeth II, considering that she presided over a lot of atrocities in Africa," opposition leader Linda Masarira said.

British colonialists took home the remains of some African fighters and leaders killed during the first anti-colonial resistance to Britain, and some are still there, she said.

"We still have the heads of our ancestors in British museums which we have asked time and again to be repatriated back to Zimbabwe and that has not been done."

Wright Chirombe, a Harare resident, said "Queen Elizabeth II's main weakness was that she never raised her voice against human rights abuses," both under Mugabe and his successor, Emmerson Mnangagwa.

All that Patrick Bande, another local, remembered about the queen was that "she came to Zimbabwe."

"I don't know if there is anything she did for our country," he said.

We haven’t rejected Justices Gaewu and Koomson – Appointment...
26 minutes ago

Stop the wrongful, multiple sale of lands — Akufo-Addo to ch...
26 minutes ago