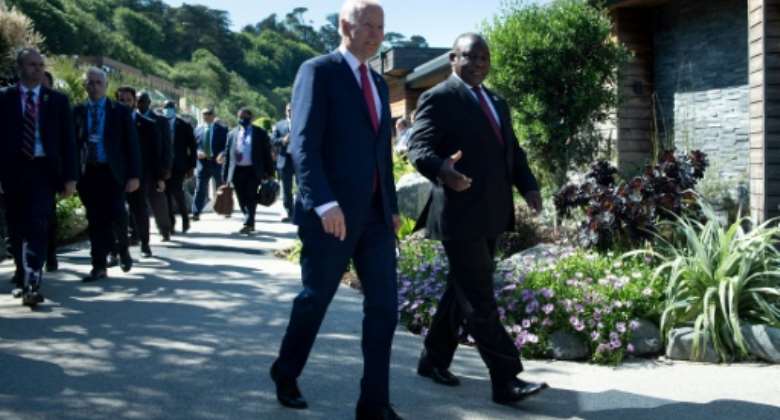 Though Biden has yet to visit the African continent as president, he has pledged a renewed interest in the region, and will host a summit of African leaders planned in Washington for December, 2022. By Brendan Smialowski (POOL/AFP/File)

President Joe Biden on Friday will welcome South African leader Cyril Ramaphosa to the White House, part of a renewed US courting of the developing world power after its caution in condemning Russia.

The visit by Ramaphosa comes a month after US Secretary of State Antony Blinken made his own trip to South Africa, where he vowed that the United States will do more to listen to Africans.

Successive US administrations have focused much of their energy in Africa on countering the growing influence of China, which has become the continent's dominant trading partner.

But Russia's invasion of Ukraine has triggered a new front in the US battle for influence in Africa, where many nations have been reluctant to embrace the West in its campaign to punish and pressure Moscow.

"There are reasons for the perspectives that exist and one should never, I think, try to pretend that there aren't histories," said South Africa's Foreign Minister Naledi Pandor.

"I think we've been fairly clear, in our view, that war doesn't assist anyone and that we believe the inhumane actions we have seen against the people of Ukraine can't be defended by anybody," she said this week at the Council on Foreign Relations in Washington.

Ukrainians living in South Africa demonstrated in the summer of 2022 in front of a Johannesburg hotel where a Russian business delegation was staying. By MARCO LONGARI (AFP/File)

"But what we have said is that a lot of the public statements that are made by leading politicians are not assisting in ameliorating the situation, because the first prize must be to achieve peace."

The United States has sought to highlight the invasion's role in soaring food prices, as Ukraine was one of Africa's largest suppliers of grain.

Russia has sought to blame food scarcities on Western sanctions, an argument dismissed by the United States, which says it is not restricting agricultural or humanitarian shipments.

South Africa's top diplomat broke with the usual polite bipartisanship of foreign dignitaries visiting Washington, not mincing words on Biden's Republican predecessor Donald Trump, who notoriously referred to nations in the developing world with an epithet.

"We relate very well, I think probably better, with the Democrats than the Republicans," she said. "You will recall how President Trump described Africa and no one has apologized for that as yet."

Ramaphosa's visit comes a month after US Secretary of State Antony Blinken made his own trip to South Africa, where he vowed that the United States will do more to listen to Africans. By Andrew Harnik (POOL/AFP/File)

Trump was the first US president in decades not to visit sub-Saharan Africa. Biden has not yet visited but has pledged a renewed interest, including with a summit of African leaders planned in Washington this December.

White House Press Secretary Karine Jean-Pierre said that Biden would speak to Ramaphosa about increasing trade and investment as well as efforts to combat climate change, a key priority for the US administration.

Like other developing nations, South Africa -- whose eastern Mpumalanga province has one of the world's largest concentrations of coal -- argues that industrialized nations should bear the brunt of efforts to cut emissions due to their historic responsibility for climate change.

Wealthy nations at last year's Glasgow climate conference promised $8.5 billion of financing to South Africa to transition away from coal.

Ramaphosa's Washington visit comes amid political woes at home, three months before a party conference at which he will seek a new term.

The South African leader risks impeachment if a new independent panel established by parliament finds that he took part in an alleged cover-up of a heist at his luxury farmhouse.