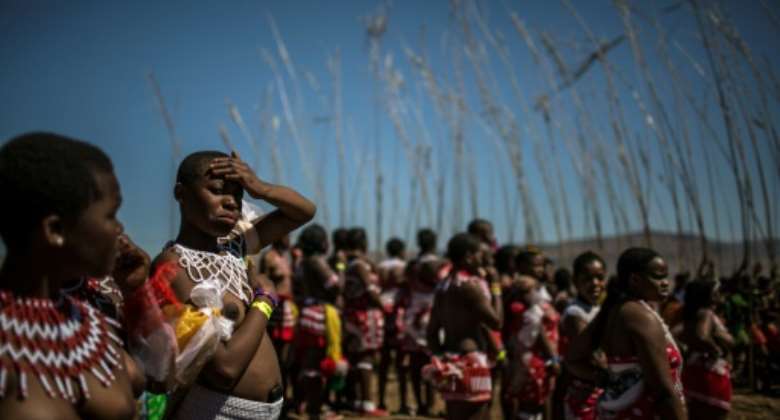 The young women participating in the traditional ceremony each carry a long reed. By MARCO LONGARI (AFP)

Thousands of bare-breasted maidens will on Saturday dance before the new king of South Africa's Zulu nation, defying criticism of this time-honoured event and a row over the legitimacy of the royal succession.

Every September, tens of thousands of young virgins descend on the royal palace in the mountain town of Nongoma in the southeastern KwaZulu-Natal province, to take part in the age-old reed dance.

He was recognised as monarch at a traditional ceremony last month following the death last year of his father King Goodwill Zwelithini, who had reigned for 50 years.

However a succession row involving two factions of the royal family rumbles on.

During the dance ceremony, each girl will present a tall reed to the new king which, legend has it, will wilt if the holder is not pure.

The ceremony is a traditional rite of womanhood, rooted historically in an occasion for the king to select new wives among his subjects.

This year's festivities are eagerly awaited -- it will be the first time the dance will take place since the outbreak of the Covid-19 pandemic.

"I can't wait for this weekend. I am so excited -- it's been a long time since we have all been together as girls," Thembalami Dumakade, 23, told AFP.

Prior to the dance, the girls will have their genitalia inspected, a tradition that has previously drawn an outcry from rights advocates who say it is demeaning and an invasion of privacy.

"The girls have the right to partake in the virginity testing if they want, it is their bodies. Those who are telling us our traditions are dated are entitled to their opinion," said Nomagugu Ngobese, one of the virginity testers, who also spoke to AFP by phone.

"But it is our culture, we do not have to consult with anyone about it."

This year's event is also been clouded by the ongoing succession battle.

Those opposed to King MisuZulu ascending the throne have warned of "bloodshed" if the reed dance goes ahead, according to local media reports.

"We have tight security on our side. Everything will go ahead as normal and we will be welcoming maidens from all corners of our country," the royal family's spokesman, Prince Thulani Zulu, told AFP.

"People are free to say what they want, it is a democracy after all. They can claim to be kings, but there is only one king".

One faction of the royal family believes Misuzulu is the rightful heir as his late mother, Queen Mantfombi Dlamini Zulu the third queen consort and sister to Eswatini King Mswati III, was a royal princess.

But Prince Simakade, the late king's first-born son who was born out of wedlock, has been championed by dissenting members of the family by virtue of being the eldest son and therefore the rightful heir.

Simakade on Wednesday filed an urgent court application seeking to dethrone his half-brother, according to local media.

"I promise I will work to unite the Zulu nation," MisuZulu, who has not addressed the succession tussle publicly, vowed during his coronation speech last month.