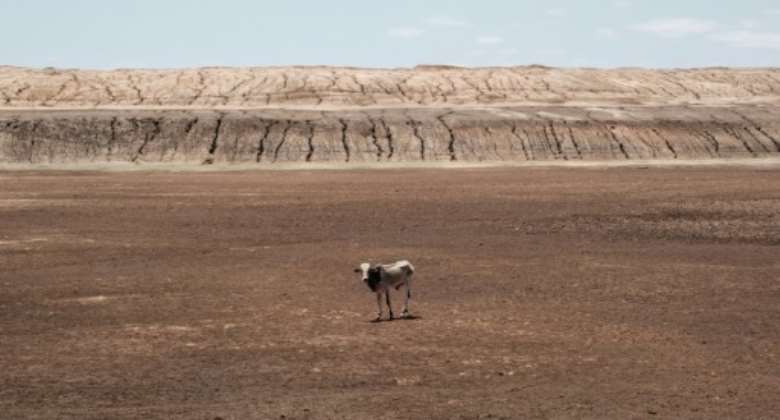 Somalia drought: An emaciated cow stands on a dried-up lake at Iresteno, a town near the Ethiopian border. By Yasuyoshi CHIBA (AFP)

"There are some folks unfortunately who are willing to sort of allocate responsibility in a sort of historical... way," he said at talks in the Senegalese capital Dakar.

"(They are) pointing a finger at us -- 'what you guys created, you guys need to clear'," Kerry said.

"Well, guess what: Mother Nature does not measure where the emissions come from -- they don't have a label of one country or another."

The United States is the world's richest country and its second biggest emitter of heat-trapping carbon dioxide.

But the first place goes to China, which joins developing economies in a negotiating bloc at the UN climate talks.

Kerry pointed to the worsening impact from climate change on Africa.

"(The) climate crisis here in Africa is more acute than it is in some other parts of the world," Kerry said.

"This year has seen devastating floods in South Africa, Mozambique and Uganda that just killed hundreds and displaced tens of thousands.

"Meanwhile, the Horn of Africa is in its fourth year of drought, with more than 18 million suffering from food insecurity as a consequence."

COP27 -- the 27th Conference of the Parties to the UN Framework Convention on Climate Change (UNFCCC) -- will take place at the Egyptian resort of Sharm el-Sheikh from November 6-18.

The annual climate parlays are dominated by often fierce debate on national pledges on emissions curbs and on funding.

On Wednesday, a bloc of the world's poorest countries said they would urge COP27 to push ahead with another envisioned area of climate finance -- a fund to compensate vulnerable nations for damage such as floods and rising seas.

Ministers and experts from the 46-nation Least Developed Countries (LDC) bloc, also meeting in Dakar, said setting up a funding mechanism for the proposed fund was of "crucial importance."

"President (Joe) Biden has brought unprecedented resources to the table, joining the Paris Agreement again on Day One after the miserable decision of a president who didn't know the science," he said.

Kerry, a former secretary of state, also pointed to the United States' help for Africa, which last year amounted to $8.2 billion in humanitarian and climate adaptation aid.

"I will say to you bluntly: the developed world needs to do more... but we need you to also be at the table to do the things that make the difference to be able to deploy the funding and make it work," he said.