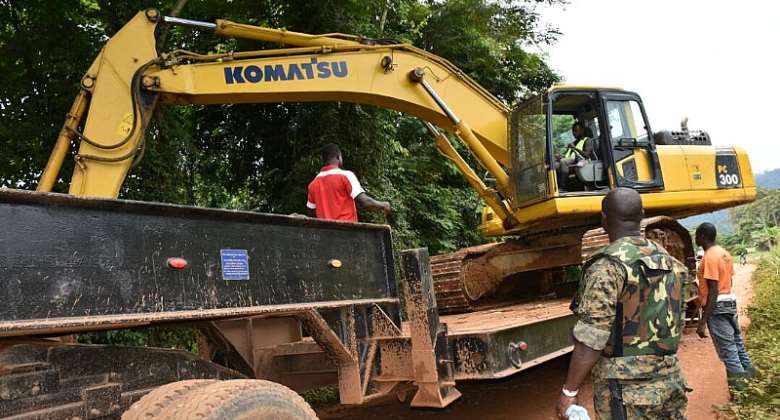 Speaking on Radio 360 ' Y3nsom morning talk show monitored by ModernGhana in Takoradi on the galamsey fight and a recent arrest of the Ellembelle DCE Kwasi Bonzoh, he wondered what really must be done if excavators are discovered to be involved in galamsey.

"...basically, sometimes our lawyers can be funny as they make a defense that the excavator was not in action at the site, so it is not part of the illegality...if you also impound and burn those (excavators) which are found involved too they say the excavator is too expensive. So we do not have to burn them. We need to take a decision as a country on what to do. I believe if the Kwasi Bonzoh team had burnt all the excavators they found all this hullabaloo would not have emanated. However, the media will jump to their defense if they are being burnt and you get some people coming to their defense will make us be deceiving ourselves as a country. I believe we need to move forward as a country and take a decisive step on what to do with the excavators involved in galamsey," he stressed.

On the arrest of the Ellembelle DCE in his bid to fight galamsey, he said it was a mix up. "REGSEC has been involved in all this fight and it was just a misunderstanding, and I am not sure anyone made a mistake. Both parties were doing their work but apparently, the Police had been detailed from the Regional Headquarters and the DCE needed to be debriefed on the operation, so he thought it wise to take some videos and report to me as the Regional Minister but unfortunately, he (DCE) was caught in the crossfire. It has however been resolved and we need not to belabour it as we are all still working as a team to ensure the galamsey menace is tackled in unison."

The Regional Minister added, "The DCE has had similar challenges with the Ellembelle Community due to his fight against galamsey. The Amansuri River has regained its former state because the DCE acted in tandem with the REGSEC and so the natural state of the Amansuri river now is a testimony of a good job by the Ellembelle DCE, Kwasi Bonzoh."

Meanwhile in a related interview with Hon Kwasi Bonzoh on Empire Community News monitored in Takoradi by ModernGhana News he stated that he had always remained convinced that the missing excavators can be traced to their owners.

"...I am convicted that the excavators can be found I am happy one has been found and will give us the needed leads to find the other excavator to bring the matter to its logical conclusion. I have worked with Hon Kwabena Okyere Darko Mensah since 2019 when he became a Regional minister and he knows the fight that is on our hands as I have briefed him on every single activity, I undertake in this galamsey fight. I was convinced I was on the side of the truth, and it is not surprising that the whole truth is coming out," he said.

Your plan to buy oil with gold instead of USD bogus; you're ...
25 minutes ago