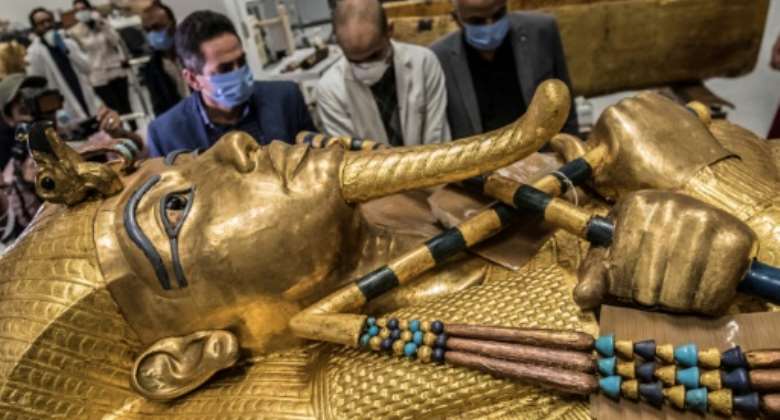 The golden sarcophagus of the Egyptian pharaoh Tutankhamun in a restoration lab at the newly-built Grand Egyptian Museum in Giza. By Khaled DESOUKI (AFP/File)

It's one of the 20th century's most iconic photos: British archaeologist Howard Carter inspecting the sarcophagus of Tutankhamun in 1922 as an Egyptian member of his team crouches nearby shrouded in shadow.

It is also an apt metaphor for two centuries of Egyptology, flush with tales of brilliant foreign explorers uncovering the secrets of the Pharaohs, with Egyptians relegated to the background.

"Egyptians have been written out of the historical narrative," leading archaeologist Monica Hanna told AFP.

Now with the 100th anniversary of Carter's earth-shattering discovery -- and the 200th of the deciphering of the Rosetta Stone which unlocked the ancient hieroglyphs -- they are demanding that their contributions be recognised.

Egyptians "did all the work" but "were forgotten", said chief excavator Abdel Hamid Daramalli, who was born "on top" of the tombs at Qurna near Luxor that he is now in charge of digging.

Ahmed Abdel Rady, 73, was born in a house built into a tomb in Qurna near Luxor, where many Egyptian excavators lived. By Khaled DESOUKI (AFP)

Even Egyptology's colonial-era birth -- set neatly at Frenchman Jean-FranÃ§ois Champollion cracking the Rosetta Stone's code in 1822 -- "whitewashes history", according to specialist researcher Heba Abdel Gawad, "as if there were no attempts to understand Ancient Egypt until the Europeans came."

The "unnamed Egyptian" in the famous picture of Carter is "perhaps Hussein Abu Awad or Hussein Ahmed Said," according to art historian Christina Riggs, a Middle East specialist at Britain's Durham University.

The two men were the pillars, alongside Ahmed Gerigar and Gad Hassan, of Carter's digging team for nine seasons. But unlike foreign team members, experts cannot put names to the faces in the photos.

Far from home: The sister obelisk of this one in Luxor, Egypt (left) stands in Paris (right) after being given to France. By Amir MAKAR, JACQUES DEMARTHON (AFP/File)

But one Egyptian name did gain fame as the tomb's supposed accidental discoverer: Hussein Abdel Rasoul.

Despite not appearing in Carter's diaries and journals, the tale of the water boy is presented as "historical fact", said Riggs.

On November 4, 1922, a 12-year-old -- commonly believed to be Hussein -- found the top step down to the tomb, supposedly because he either tripped, his donkey stumbled or because his water jug washed away the sand.

The next day, Carter's team exposed the whole staircase and on November 26 he peered into a room filled with golden treasures through a small breach in the tomb door.

According to an oft-repeated story, a half century earlier two of Hussein's ancestors, brothers Ahmed and Mohamed Abdel Rasoul, found the Deir el-Bahari cache of more than 50 mummies, including Ramesses the Great, when their goat fell down a crevasse.

Lost treasure: Egypt wants the ancient bust of Nefertiti back from Berlin. By Michael SOHN (POOL/AFP/File)

But Hussein's great-nephew Sayed Abdel Rasoul laughed at the idea that a goat or boy with a water jug were behind the breakthroughs.

Riggs echoed his scepticism, arguing that on the rare occasions that Egyptology credits Egyptians with great discoveries they are disproportionately either children, tomb robbers or "quadrupeds".

The problem is that others "kept a record, we didn't", Abdel Rasoul told AFP.

Local farmers who knew the contours of the land could "tell from the layers of sediment whether there was something there," said Egyptologist Abdel Gawad, adding that "archaeology is mostly about geography".

A caretaker sits outside the tomb of the pharaoh Tutankhamunin in the Valley of the Kings at Luxor. By Amir MAKAR (AFP)

Profound knowledge and skill at excavating had been passed down for generations in Qurna -- where the Abdel Rasouls remain -- and at Qift, a small town north of Luxor where English archaeologist William Flinders Petrie first trained locals in the 1880s.

Mostafa Abdo Sadek, a chief excavator of the Saqqara tombs near Giza, whose discoveries have been celebrated in the Netflix documentary series "Secrets of the Saqqara Tomb", is a descendant of those diggers at Qift.

His family moved 600 kilometres (370 miles) north at the turn of the 20th century to excavate the vast necropolis south of the Giza pyramids.

But his grandfathers and great-uncles "were wronged", he declared, holding up their photos.

Their contributions to a century of discoveries at Saqqara have gone largely undocumented.

Another Egyptologist, Fatma Keshk, said we have to remember "the historical and social context of the time, with Egypt under British occupation."

The struggle over the country's cultural heritage became increasingly political in the early 20th century as Egyptians demanded their freedom.

"We are the children of Tutankhamun," the diva Mounira al-Mahdiyya sang in 1922, the year the boy pharaoh's intact tomb was found.

The same year Britain was forced to grant Egypt independence, and the hated partage system that gave foreign missions half the finds in exchange for funding excavations was ended.

But just as Egyptians' "sense of ownership" of their heritage grew, ancient Egypt was appropriated as "world civilisation" with little to do with the modern country, argued Abdel Gawad.

Excavator Mostafa Abdo Sadek shows pictures of family members who helped uncover the treasures of the tombs of Saqqara, southwest of Cairo. By Ahmed HASAN (AFP)

"Unfortunately that world seems to be the West. It's their civilisation, not ours."

While the contents of Tutankhamun's tomb stayed in Cairo, Egypt lost Carter's archives, which were considered his private property.

The records, key to academic research, were donated by his niece to the Griffith Institute for Egyptology at Britain's Oxford University.

"They were still colonising us. They left the objects, but they took our ability to produce research," Hanna added.

This year, the institute and Oxford's Bodleian Library are staging an exhibition, "Tutankhamun: Excavating the Archive", which they say sheds light on the "often overlooked Egyptian members of the archaeological team."

In Qurna, 73-year-old Ahmed Abdel Rady still remembers finding a mummy's head in a cavern of his family's mud-brick house that was built into a tomb.

The linen-wrapped mummy of Tutankhamun displayed in a climate-controlled glass case in the Valley of the Kings in Luxor in 2015. By Khaled DESOUKI, Khaled DESOUKI (AFP/File)

His mother stored her onions and garlic in a red granite sarcophagus, but she burst into tears at the sight of the head, berating him that "this was a queen" who deserved respect.

For centuries, the people of Qurna lived among and excavated the ancient necropolis of Thebes, one of the pharaohs' former capitals that dates back to 3100 BC.

Today, Abdel Rady's village is no more than rubble between the tombs and temples, the twin Colossi of Memnon -- built nearly 3,400 years ago -- standing vigil over the living and the dead.

Four Qurnawis were shot dead in 1998 trying to stop the authorities bulldozing their homes in a relocation scheme.

Some 10,000 people were eventually moved when almost an entire hillside of mud-brick homes was demolished despite protests from UNESCO.

In the now deserted moonscape, Ragab Tolba, 55, one of the last remaining residents, told AFP how his relatives and neighbours were moved to "inadequate" homes "in the desert".

The Qurnawis' dogged resistance was fired by their deep connection to the place and their ancestors, said the Qurna-born excavator Daramalli.

But the controversial celebrity archaeologist Hawass, then head of Egypt's Supreme Council of Antiquities, said "it had to be done" to preserve the tombs.

What remains of the mud-brick village of Qurna near Luxor where excavators and their families lived for centuries. By Amir MAKAR (AFP)

Egyptologist Hanna, however, said the authorities were bent on turning Luxor into a sanitised "open-air museum... a Disneyfication of heritage", and used old tropes about the Qurnawis being tomb raiders against them.

Sayed Abdel Rasoul's nephew, Ahmed, hit back at what he called a double standard.

"The French and the English were all stealing," he told AFP.

"Who told the people of Qurna they could make money off of artefacts in the first place?"

Over the centuries, countless antiquities made their way out of Egypt.

Ahmed Abdel Rady, 73, was born in a house built into a tomb in Qurna near Luxor, where many Egyptian excavators lived. By Khaled DESOUKI (AFP)
0

Some, like the Luxor Obelisk in Paris and the Temple of Debod in Madrid, were gifts from the Egyptian government.

Others were lost to European museums through the colonial-era partage system.

But hundreds of thousands more were smuggled out of the country into "private collections all over the world," according to Abdel Gawad.

Former antiquities minister Hawass is now spearheading a crusade to repatriate three of the great "stolen" treasures -- the Rosetta Stone, the bust of queen Nefertiti and the Dendera Zodiac.

He told AFP he plans to file a petition in October demanding their return.

The Rosetta Stone has been housed in the British Museum since 1802, "handed over to the British as a diplomatic gift", the museum told AFP.

Ahmed Abdel Rady, 73, was born in a house built into a tomb in Qurna near Luxor, where many Egyptian excavators lived. By Khaled DESOUKI (AFP)
1

Nefertiti's 3,340-year-old bust went to Berlin's Neues Museum a century later through the partage system, but Hawass insisted it "was illegally taken, as I have proved time and again."

The Frenchman Sebastien Louis Saulnier meanwhile had the Dendera Zodiac blasted out of the Hathor Temple in Qena in 1820.

The celestial map has hung from a ceiling in the Louvre in Paris since 1922, with a plaster cast left in its place in the southern Egyptian temple.

We haven’t rejected Justices Gaewu and Koomson – Appointment...
56 minutes ago

Stop the wrongful, multiple sale of lands — Akufo-Addo to ch...
56 minutes ago