The Reasons For The Death Of Me 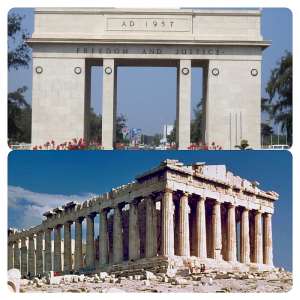 Certainly you did not think that last three-weeks’ piece, ‘Uncertainty Will Be The Death Of Me’ was about me. Because why would I come over here and embarrass myself like that? Or maybe for a minute you thought it was in fact an autobiographical piece, but having gone through that short article as you did, and finding the word Greece being mentioned more times than our Ghanaian selves could ever care for, you were quick to predict that the following week’s article, ‘Unpredictability Will Be The Death of Me’ was also not about the writer, but the country Greece still—or better still, Athens. Or yet still, the law.

Why These Histories?
These historical journeys we suffer ourselves through over here in this column when touching on even the most elementary of topics is undoubtedly very vital to our understanding of those particular topics. But frankly speaking, we make that effort of traversing history most especially because in doing so, we reveal for ourselves, a particularly potent secret about our own selves—about us all humanity interspersed worldwide. And that secret is this: we really are one people. [NB: the emphasis placed on the word ‘really’ is lost in print, because—fun fact—by custom, the B&FT newspaper print version is not the biggest fan of italics].

We really are the same people, and that’s a fact. History shows us that. The African, the Caucasian, the Asian, us all people of different shades and shapes, are in the end, the same people. And that is why it must be particularly funny for the gods engaged in watching this little movie of ours called earth, when they find us people of different races, for the sake of our present states, insisting on our supposed superiorities over others—as though those acts and states we belittle now, we have not found ourselves doing and being same in our not-so-distant pasts.

Us all people spread worldwide have lived our lives the same—albeit having our timelines differing from one another every now and then. We see this sameness reflected in every aspect of our human lives. In our sociological existence, we see similarities between us all races… How we have undertaken the mundane act of living have been the same—right from the ancient times when human advancements were merely in their nascent stages, to this age of immense technological strides. How we have historically gone in search of foods to eat for survival have been the same; how we have operated our families, same; how we have treated the two separate genders historically—the roles we have assigned to each other—have also been same. The list goes on.

A Very Archaic Example
For instance, during those ages when the main economic activity was hunting and gathering, the male physical form, biologically more accustomed to displaying physical strength when occasions such as these arose: running after animals, hitting said animals in the head with a weapon, or as David purportedly once did, with their very bare hands, killing said animals even when these animals were lions… these biological talents afforded the male, came very much in handy for the survival of family.

The female form on the other hand, more accustomed to displaying that otherworldly biological physical strength when occasions such as the carrying of a whole human being in bellies arose… These female forms are able to rise to this occasion—an occasion that causes a shift in their internal organs, note—and are able to bring forth these humans to the world, and tomorrow, proceed to walk about as though nothing has happened; and when even miles away, should these human babies they have birthed be in distress, should they so much as cry, these females are able to feel such tears in their breasts, and are immediately at these fragile living beings’ beck and call. These women are the gods of creation themselves.

And so it was during these archaic ages, when the principal sociological activity needed to spur economic existence was, for the woman, childbirth, and for the man, bringing home the meal.

But centuries upon centuries on, after series upon series of human advancements later, in this modern era of ours, the principal human economic tool has long shifted away from mundane activities like hunting and gathering, onto the utilisation of the human brain. In this information age, nations that display the best of mental prowess are those that rule the world. In this very enlightened age of ours, we are lucky to have both our sexes equally blessed with the prerequisite biological tool, the brain. No longer is the man’s principal economic and sociological duty, and the display of their strength to be in the hunting of wildlife; and no longer is the woman’s to be only the birthing of new life. Both of these sexes have moved onto yet another purpose, and it is this: the utilisation of their enormous brain power to drive the world around them.

And this journey towards the discovery of the vast potential of the sexes—one that goes beyond their individual biological prowess, such as childbirth is to the woman… this journey towards the full discovery of God’s plan for both the woman and the man, one that transcends their respective sexes, has not been a journey peculiar to one race or the other. Slowly but surely, us all people spread far and wide, have come to and are coming to this realisation.

But this whole thing is just an elementary example for the actual matter at hand—and a strange one, I’ll admit…

The Pretentious Rich
You know how when some poor people finally move from their state of hardship into wealth, and they begin to act like they have totally forgotten their past? Like the person who incredulously asked, “Why do people buy 2 Cedis phone credit? What can 2 Cedis credit do for you?!” Silly question, no? Because right now, if you dial #111 on your Airtel/Tigo, you can get 165-megabyte data or even 40 minutes worth of call bundle. (Someone, please tell Airtel/Tigo to come and pay B&FT for this free ad right here). Asking your fellow human being ‘what can 2 Cedis worth of phone credit do for you’ is a typical the ‘once-poor-now-rich-forgotten-how-it-was-to-be-poor’ person behaviour. And the developed nations of our time, they tend to behave this way. And us developing countries, we tend to allow this ‘abuse’ upon ourselves.

Developed countries when experiencing this glorious amnesia of theirs tend to conveniently forget that all that is plaguing the developing nations of today, they themselves have been plagued with in their not-so-distant pasts. Talk about the internal conflicts, the external wars, the segmentation of societies, the at-times malfunctioning and semi-functioning legal systems and the consequent malfunctioning and semi-functioning societies, all these are challenges that developed worlds of today have had to face in their past—in often-times, eerily exact details as those faced by developing nations of today. Of course this is not to suggest to modern developing states to remain in these states of affairs. Because this fatalism and recidivism, that is how failed nations are made, you know.

Before We Head Back To Greece…
I never intended for us to stay in Greece this long. I intended them just a passing anecdote, ushering us into our own legal system, specifically the application of the tenets of the rule of law, but unsurprisingly, there seems to be a lot to discover in this ancient city. Because even as we discover the supposed birth of the concept of rule of law in that ancient world, we uncover too, similarities in our human existence—cutting across all segments.

I mean, look at the conquests and subsequent colonisations that ensued in those ancient city-states, the inference of barbarianism, the segmentation of societies, the endless conflicts and wars… And let’s quickly go back to weeks and weeks ago when we looked at other European countries like France (in the ‘Never Say Coup’ articles) and Britain (as briefly done in the ‘Mischief in Law’ article) …Didn’t we see this same trend of connotation of barbarianism, subsistence living, conquests, imposition of rule through, among others, colonialism in those nations’ histories too?

This history of lowliness in all forms is indeed not peculiar to developing countries of today, it is certainly not peculiar to this African continent of ours. And this assertion right here is to form the basis of our careful dissections later. We will have to look more closely at this suggestion of sameness. Because there is much more interesting things to uncover.

But before we could continue with this series, as inevitably focused on Greece as, at least the next piece will be, we had to take this breather to ask ourselves: ‘why this Greek journey in the first place?’ Because I, for one, was getting lost in the writing and seemed to be forgetting the reasons why.

At every point of our inquisitions into matters concerning our human existence—be it national, continental, or global, I like for us to be able to pinpoint those instances of sameness. This helps dismiss and debunk those notions of peculiarities in us—as often times imposed on us as they are. Because what is it that we said weeks back in the ‘Never Say Coup’ article, “When a people are made to believe that certain negatives are peculiar to them, such a people begin to truly believe that such things are in fact in their nature. And when this happens—when this notion of peculiarities is borne and ingrained in such a people, what ensues is perpetuity. And something that is supposed to be a mere hitch in their national journey, becomes to the people an essence of self and of nationality.’

Ghana has a history of its own; but this history has been no different from pretty much the rest of the world’s. Hence our pace at national growth, be it economical, sociological, political, or as we, in this series intend to place focus on, legal, has no business performing poorly. Especially when the rest of the world have suffered same or similar histories and have come out victorious.