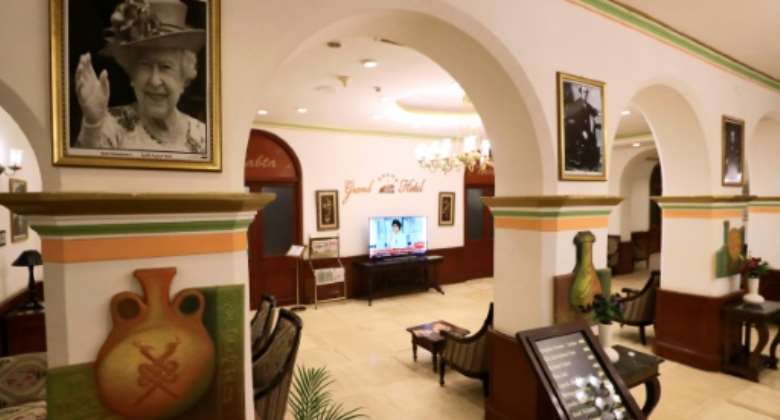 A portrait of Queen Elizabeth II still takes pride of place in Khartoum's colonial-era Grand Hotel where she stayed during a visit to Sudan in 1965. By ASHRAF SHAZLY (AFP)

It has been more than 50 years since Queen Elizabeth II visited Sudan but there are still some who remember her tour of the formerly British-ruled territory in its first decade of independence.

In subsequent decades, repeated military coups and civil war between north and south have led to protracted isolation and partition into two independent nations.

There is not much nostalgia for British rule. Many in the rump Sudan left behind by the south's secession in 2011 blame it for fanning the ethnic and religious differences that eventually led to the bloody divorce.

But there was genuine fondness for the queen personally when her death at the age of 96 last week brought down the curtain on a reign lasting more than 70 years.

"I was a schoolgirl in my uniform and we were pulled out of school to greet the queen," recalled Khartoum resident Belqis Rikabi, now in her 70s.

Rikabi remembered that she had been impressed by the queen's dress and had tried to get through the jostling crowd to touch the fabric.

"One of the guards hit me very hard but then the queen saw this and called out: 'No, no, no'," Rikabi said.

"He stopped and then she held up the hem of the dress for me to examine it."

During her stay in the Sudanese capital in February 1965, the queen stayed in the colonial-era Grand Hotel overlooking the Nile, where a portrait of her still takes pride of place alongside pictures of other eminent Britons, including wartime prime minister Winston Churchill.

The hotel, which overlooks the Nile, boasts other famous visitors over the years, including anti-apartheid hero Nelson Mandela and US civil rights leader Malcolm X. By ASHRAF SHAZLY (AFP)

"The hotel holds memories, photos and records for all the world's greatest people who visited the country in different periods, most notably Queen Elizabeth," said the hotel's general manager, Abdelmoneim Abdelmahmoud al-Hassan.

The hotel was built in 1902 and other visitors over the years have included anti-apartheid hero Nelson Mandela and US civil rights leader Malcolm X.

Though it was long ago, the queen's visit "has good resonance" among Sudanese people, Hassan said.

Surviving newsreel footage of the visit is dominated by camel racing and camel-mounted cavalrymen in traditional robes.

But the queen also visited development projects first conceived when Sudan was still ruled under a British-dominated joint administration with Egypt.

Outside Khartoum, she toured the Gezira agricultural scheme in the fertile soils between the Blue Nile and the White Nile, still one of the world's largest irrigation projects.

She visited farmers in the Gezira state capital Wad Madani and the Roseires Dam on the Blue Nile, which was completed the year after her visit.

Now 73, Manahel Abou Kashwa was among those who greeted the queen in Wad Madani.

As a 16-year-old, Abou Kashwa says she was among 10 pupils chosen to escort the monarch around their school.

"As a young girl, I was amazed at the queen and how people were doing everything for her. I was however happy to be chosen to accompany her."

Thirty-five years later and now married to a senior Sudanese diplomat, Abou Kashwa met the queen again when her husband, Hassan Abdeen, presented his credentials as Sudan's ambassador to the United Kingdom.

"I told her we met before and she laughed," Abou Kashwa said.

When Abou Kashwa learnt of the queen's death, she said: "I was saddened. She was a great woman."