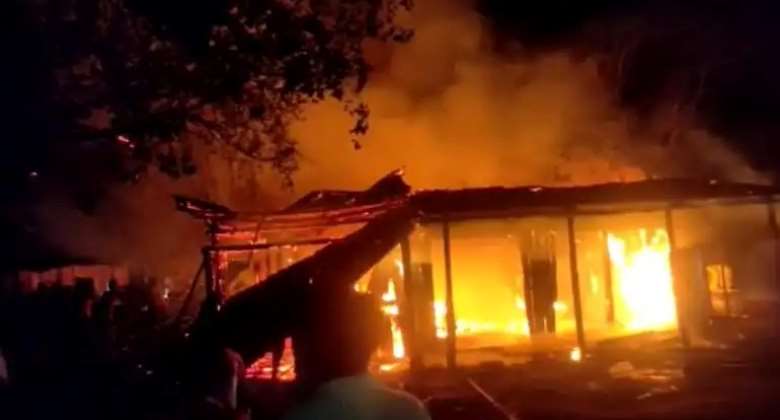 There has been a suspected attack at Ablotsi, a community in the Lower Manya Krobo Municipality in the Eastern Region.

A physically challenged man, Thomas Teye Asangyongmor has lost his life through the incident.

According to information gathered, the physically challenged man who died in the fire was clubbed by unknown attackers and left to die.

His makeshift structure which serves as his home subsequently collapsed on him as the fire burnt him to death.

The suspected arson and murder incident has been reported to the Odumase Krobo Police in the Eastern Region who are now investigating the matter.

Already, crime scene investigators from the Ghana Police Service have visited the scene for preliminary investigations.

Opening up on the incident to the media, Joseph Kwame Acheampong who is an Assembly member for Yohe Electoral Area, narrated, “This morning, around 8:45, I had a call from my colleague Assemblyman that somebody had been found dead at Ablotsi top.

“I quickly ran to the site so I asked the family member and he said around 4:30am, they came here and they saw that their relative had been killed and burnt."

The family of the victim is pleading with the police to fast-track investigations to get to the bottom of the matter.

Meanwhile, the charred body has been conveyed and deposited at the Atua Government Hospital morgue.