Kufuor’s $3,000-per Diem: A Private Investigation 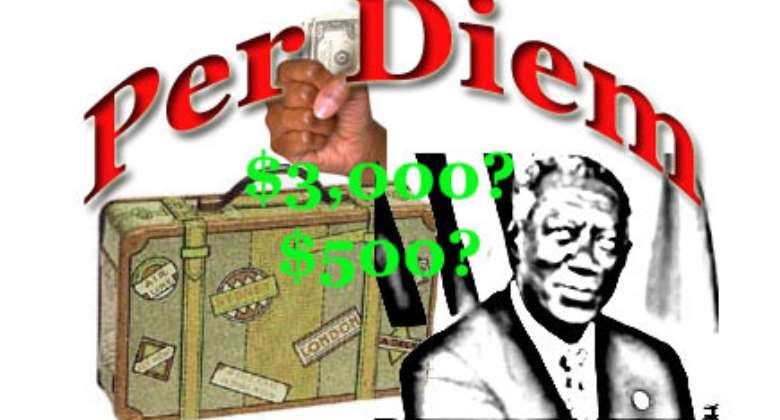 After reading the following articles: Kufuor's Per Diem Is $3000 a day – Wayo and "The President and his per diem allowance = 'Legalized stealing”, I embarked on a private investigative campaign to unearth the truth on the amount of "per diem" President Kufuor draws on his travels. The frequency with which President Kufuor has been traveling abroad raised my suspicion that the "per diem" could be a motivating factor. After some unsuccesful initial skirmishes, I was directed to a state institution responsible for the per Diem. This is a transcript from my conversation ..after introducing myself and getting past the secretary, I was directed to an official who is suppose to deal with these matters Me: Do you know the amount of "per diem" President Kufuor draws on his travels Official: Why do you want to know? Me: Sir, Is this not public information? Official: No, it's confidential. Me: Why is it confidential? Official: Where did you say you're calling from? Me: Accra (that was a lie) Official: Where in Accra? Me: Is that relevant? Official: Look, I don't have time … I have to leave for lunch now .. Call me later Me: …but sir ….. beep beep beep …phone goes dead. I tried the following institutions: Ministry of Finance, a Ghanaian mission abroad and The Castle. In most cases, I did not even get past the secretary. Having hit a brick wall getting through to the official channels, I decided to go the "Ghana way", i.e. bribe a junior officer at the state institution I had called to get me the information. This is what he found out for me The President gets $3000-a-day when the travels abroad. Accommodation, transport and all expenses he incurs, during the trip, are paid for by the state and sometimes by the invitee. Ministers get approximately $500-a-day for foreign travel Is this true or false? Hard to tell, but at least I got a figure. There is no reason on earth why the matter of how much the President receives per diem on his foreign travels should be a secret. In fact, as I understand the applicable constitutional provisions, it is Parliament (acting on the recommendations of a special committee) that must determine the salary and other benefits of the President. Thus, the matter of how much the President (and Ministers of state) make, including such fringe benefits like travel allowances, should be a matter of public record. These are not matters to be left to the grapevine and to petty gossip. If the government deems my figures are inaccurate, then I dare them to release an official statement. Failure to do so mean my “ill gotten” figures is accurate. The only way to win the war on rumor-mongering is transparency. Unfortunately, the Kufuor administration has failed to grasp this basic rule. Note: The government hasn't released an official per diem figure yet. All they've done is indirectly use our police service, who in turn claims to have contacted the audit general. If something backfires the government will feign innocence. We dare them to come up with their figures, if they are not hiding anything. Views expressed by the author(s) do not necessarily reflect those of GhanaHomePage.