Who deserves our scorn: Togbe or Kennedy Agyapong? 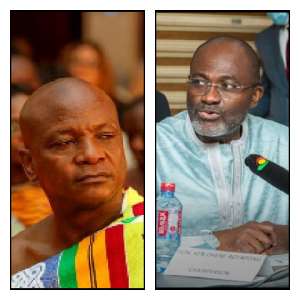 Ghanaweb reports that Togbe Afede XIV of the Asogli State has rejected gifts from Hon. Kennedy Agyapong. They were assorted items including cartons of bottled water. The people of Ho where the respected Paramount chief sat on his throne were celebrating the yam festival. The Member of Parliament for Assin North who has lately shown intent to lead his New Patriotic Party (NPP) as the flagbearer into the next presidential contest for the highest office in Ghana was at the festival grounds to pay homage customarily. So it's our Ghanaian culture. Even now republican since 1960, Ghanaians hold in high esteem our traditional leaders, and on such occasions those blessed with riches present gifts to the chiefs who will have dependants to feed.

But this time, contrary to the popular axiom that: a gentleman does not reject a gift, the noble chief openly rejected the mouthwatering gifts from the politician.

The portal continued that, from their sources, they've learnt Hon. Kennedy Agyapong has in some time past badmouthed the Asogli monarch, and the latter demanded unqualified apology from the former to engender reconciliation before gifting to the yam festivities.

On the comment section of the Ghanaweb platform, Ghanaians are split in their response to what ensued at the durbar grounds, as people geared and booed the presenter of the gifts when they were ordered to carry them back into their vehicles.

Those who support the actions of the chief say: "it serves Kennedy Agyapong right. You can't accept gifts from an enemy" (sic).

The backers of the politician on the other hand are of the view that His Majesty Togbe Afede XIV should have in the name of peace accepted the gifts, because festivals are meant to extend a hand of friendship" (sic).

Who then deserves our scorn, or praise: Togbe or Kennedy?

I am Akan, specifically Bono, and with my knowledge of our chieftaincy issues, a subject is expected to smoke a peace pipe with the chiefs when he or she is accused of being disrespectful towards them. Not necessarily when you're wrong, but in the name of peace and coexistence. In my native Goka, we say: the tree that does not allow itself to be toyed by the wind, breaks.

Some may argue that the chief should have received the gifts and presented them to people who may need them. They shouldn't forget also that the chiefs do have counsellors as do the politicians.

It reminds me of the popular Trojan Horse story. Prince Paris advised his father, the King of Thor, to reject a gift in the form of a wooden horse from a former enemy, Troy. The king didn't listen, and after merriments, when the people of Thor went to sleep, the soldiers of Troy, the former enemies that hid in the wooden horse came out and put all men in Thor to the sword. Only a few women and their children escaped through a tunnel to an unknown world.

Now, this is a template and a guiding principle for all kingdoms, whether in Greece, Britain, Assin, Asante, Bono or Asogli.

Mr. Kennedy Agyapong may have good intentions to present the gifts to the Asogli chiefs, but my Bono people say: when there are piles of wood, the top ones are removed first. If the chiefs have raised concern about your utterances towards them, first do for them their first demands, before the gifts.

When one does something with good intentions, he or she does so without conditions attached to it.

Hon. Kennedy Agyapong is obviously not an Ewe to be strictly bound to observe the customs of the chiefs of the Asogli State, but his political journey will surely compel him to assimilate into all Ghanaian cultures, and the debacle with Togbe Afede will show his determination and readiness for the Jubilee House.