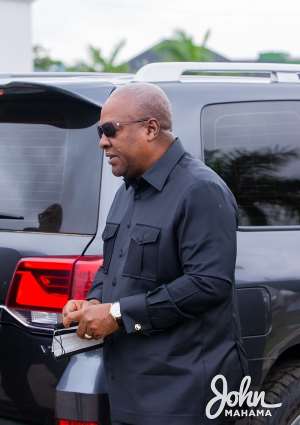 Persecution, victimisation and demonisation of honest and innocent people could be painful, but after suffering devastating tragedies and unfair treatments, some remarkable people are able to put aside their anger and pain to find mercy in their hearts.

The story is told of an Iranian woman, Samereh Alinejad whose son was murdered, and the murderer of her son was going to be executed. But in a dramatic turn at the gallows, moments before the killer was executed to be executed, Alinejad made a last-minute decision to pardon the man, and the murderer was freed. Because Alinejad never held grudges against the killer of her son, she is now a heroin. Wow!

President Mahama suffered a lot when he was president. He was victimised, persecuted, piloried and demonised. For example, this is what Opana said about him before the 2016 Elections, "President Mahama is dangerous for the future of the youth and the future of Ghana. He cannot be trusted to protect the public purse."

Intriguingly, we now know those who are dangerous for the future of the youth in this country and those who cannot be trusted to protect the public purse!

In all these, President Mahama never held grudges against anyone. In fact, he did good to all manner of people, and his nationalistic attitude led to the provision of vital social amenities to Ghanaians across the length and breadth of the country.

A typical case was the construction of a Water Treatment Plant for the people of Kyebi in the East Akyem Municipality of the Eastern Region.

The water treatment plant was part of six projects at Akyem Asafo, Apedwa in the East Akyem Municipality, Kwabeng and Anyinam in the Atiwa District and Osenase in the West Akyem District, which were constructed at the cost of 7.9 million Euros by the Mahama Administration.

Little wonder he is a hero, and nearly everyone wants him back as president of the Republic on 7th January, 2025.