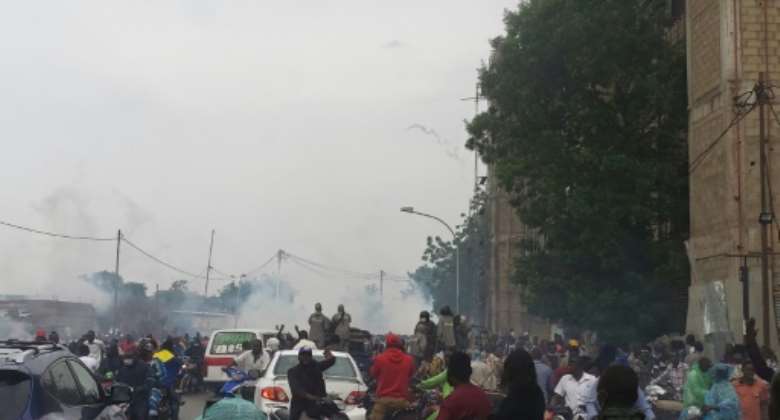 Police in the Chadian capital N'Djamena fired tear gas on Friday to disperse supporters of a leading critic of the country's ruling junta as he was summonsed for questioning following clashes last week, an AFP reporter saw.

Succes Masra, president of a party called The Transformers, was surrounded by hundreds of supporters as his car headed for the meeting with public prosecutors.

Police fired tear gas to break up the crowd, and the car turned around and headed back to the party's headquarters.

On Twitter, Masra accused the police of "attacking us and firing live rounds as the people came out to accompany us. The world is witness. They want to stop the dialogue of the people through violence."

The confrontation came on the heels of a crackdown on Transformers activists last week as they planned to stage an unauthorised rally.

Around 200 were arrested and held for several days before being released, while the security forces surrounded the party's headquarters, which also doubles as Masra's home, before lifting the siege on Sunday.

Masra, 39, told AFP on Thursday he had received a summons to go to the prosecutor's office the following day, the reasons for which, he said, were not disclosed.

On Friday morning, he announced on Twitter that he would attend -- "I will go marching and singing for the freedom of the people... (but) I will not be alone."

The Transformers are the most radical component of an opposition coalition that is boycotting a forum launched by Chad's military ruler, General Mahamat Idriss Deby Itno.

Deby took the helm after his father Idriss Deby Itno, who had ruled with an iron fist for three decades, was killed in April 2021 during an operation to fight rebels.

Deby is hosting a forum whose declared aim is to steer the country back to civilian rule. By Djimet WICHE (AFP)

The junta has suspended the constitution and dissolved civilian government but vowed to hold "free and democratic elections" within 18 months.

These are tied to the outcome of an "inclusive national dialogue," bringing together government officials, political parties, NGOs and armed rebel groups, that was launched by Deby last month after repeated delays.

After the launch, the dialogue ran into procedural wrangling, and its scheduled end has been pushed back by 10 days, to September 30.

Analysts say there is scant chance of holding elections within the 18-month timeframe, and point to an option previously announced by Deby under which the vote could be delayed by a further 18 months "if the Chadians fail to reach agreement."

Why go to the IMF when SSNIT can give you the money you need...
41 minutes ago