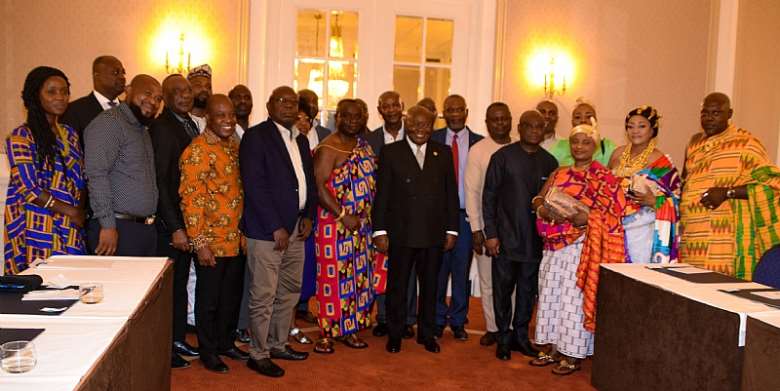 Leadership and representatives of the Ghanaian community in the Netherlands, put their concerns before His Excellency, Nana Addo Dankwa Akufo-Addo, the President of the Republic of Ghana during a meeting held in Den Hague on 4th September 2022.

The meeting was part of the working visit of the President to Netherlands, where he participated in the GCA Africa Adaptation Summit in Rotterdam on 5th September, 2022 and also held bilateral meeting with the Dutch Prime Minister Mark Rutte on 7th September, 2022.

The Ghanaian Community congratulated the President on his ascendancy to the high office as the President of the Republic of Ghana for the second time and expressed their appreciation for making time off his busy schedule to meet with them.

The leadership also requested that the Ghana Card should be made available to Ghanaians in the Diaspora.

Furthermore, the leadership requested for the implementation of the ROPA law to make it possible for Ghanaians in the Diaspora to vote.

Also, the group requested that the President looks into the issue of seizure and auction of cars and goods by the Ghana Revenue Authority and the Ghana Ports and Harbours Authority.

Lastly, the group appealed to the President to move the Embassy of Ghana to the capital, Amsterdam since majority of Ghanaians in the Netherlands were living in that area.

On the issue of the dual citizenship His Excellency stated that laws of Ghana allow for dual citizenship but indicated that government will take up the matter with the Dutch authorities to find the way forward.

As regards to the issue of Ghana Card, the President disclosed that about 17 million Ghanaians have so far been issued with the cards. He added that, the NIA was working on a pilot program to capture the details of all Ghanaians in the diaspora and would soon commence the process of capturing the details of Ghanaians abroad.

On the issue of the seizure of goods at the port, the President indicated government was addressing the problems in the sector as witnessed by recent changes made at the institutions in question to curb some of the issues stated earlier.

On the request to relocate the Embassy, the President explained that Embassies are located at the seat of government and therefore since The Hague remains as such, the embassy could not be moved. He however indicated government could consider the possibility of establishing consulate in Amsterdam.

OSP not enough to win the fight against corruption — Micheal...
33 minutes ago