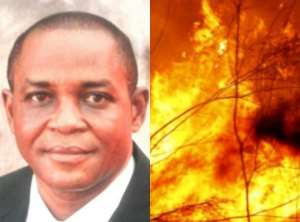 The Upper East Regional Forestry Manager, Emmanuel Yeboah has announced that areas in Bawku are noted for bush burning.

Speaking in an exclusive interview with this reporter on Tuesday, September 6, 2022, Mr. Yeboah pointed out that the ongoing conflict in the Bawku Municipality has worsened the issue as people indiscriminately set bushes on fire.

He said, “Our people are even finding it difficult to do their normal work. If you are in the Pusiga area, Garu, you have no problem but if you are from Bawku Municipality going out, is a problem. So, because of these conflicts, disorganizes them. Even in Bolga district some area like Anateem there has been incidents of bush fire too but not much."