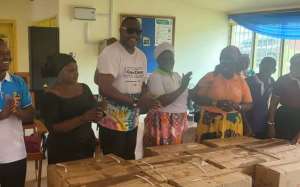 Cape Coast North Member of Parliament, Dr. Kwamena Minta Nyarku has donated 40 sewing machines to the Ghana National Dressmakers and Tailors Association and some individuals in the constituency.

According to him, supporting the association was part of his dream to empower his constituents to meaningfully contribute their quota to the economic prosperity of the constituency.

"This is my quota in that regard and I hope this gesture would go a long way to helping the association train more people to be self employed. I'm giving out these 30 machines to the association."

Dr Nyarku shared that he has decided to donate 10 sewing machines to each zone of the four zones of the association within his constituency. "Again, I've already given out 10 of the machines to some private individuals, making it 50 in all".

During the presentation ceremony held at the Kakumdo Assemblies of God Church, the Cape Coast North Member of Parliament said during one of their graduation ceremonies this year, his attention was drawn to the plight of the association where he promised to help as and when resources are available.

Receiving the donation for and on behalf of the association, Madam Martha Abaidoo, chair of the occasion expressed her heartfelt appreciation to the MP for keeping to his word. "We're very amazed and at the same time elated to have received these sewing machines".

She however appealed to the MP to also assist them more in that regard.

She further encouraged those unemployed to consider learning a trade in tailoring or dressmaking to enable them earn a decent living.

The leaders of the various zones of the Association; UCC, Abura and Kakumdo represented by Gloria Appiah, Papa Pee and Aunties Sheba respectively received the donations. The last zone, which is Efutu is yet to pick up their share of 10 sewing machines.

Before the donations by Dr. Minta Nyarku together with Hon George Rickets-Hagan, Member of Parliament for Cape Coast South donated some quantities of gun powder, gun chips, firewood, schnapps, locally brewed gin and some amount of money to the Asafo Companies and their respective Supis (Leaders).

They later also donated some drinks, schnapps and an unspecified amount of money towards the 2022 Oguaa Fetu Afahye which was climaxed over the weekend.