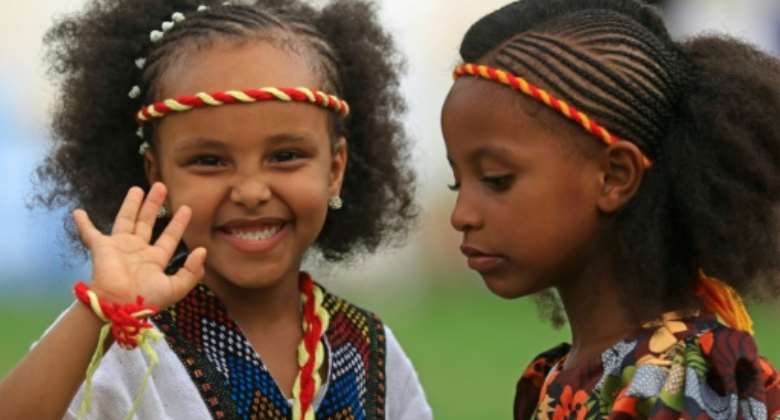 Ethiopian girls, wearing headbands in the colours of the Tigrayan flag, take part in the Ashenda celebrations at al-Qurashi park in the Sudanese capital Khartoum. By ASHRAF SHAZLY (AFP)

Donning a festive white dress, with her hair intricately braided and her eyes lined with the traditional kohl paint, Ethiopian Yudita Ihab prepared for the annual Ashenda celebration.

But for Yudita and the thousands of other women who gathered in Sudan's capital Khartoum late last month, the normally joyful week-long Ethiopian holiday was overshadowed by the ongoing war that has ravaged the northern Ethiopian region of Tigray they hail from.

"It's our identity and we want to express it despite the difficulties we are going through," Naabali Kahtay told AFP.

The two-year conflict between Ethiopian government forces and the Tigray People's Liberation Front (TPLF) has created a humanitarian crisis, driving tens of thousands of people to seek refuge in neighbouring Sudan and wrenching families apart.

For Tigrayans in Sudan, the conflict has transformed their view of Ashenda, typically marking the end of a 15-day fast known as Filseta, which is observed by the Ethiopian Orthodox Tewahedo Church.

As part of the festivities, women wear skirts made of weaved Ashenda grass over white cotton dresses with colourful embroidery. By ASHRAF SHAZLY (AFP)

Naabali said she had lost contact with her family more than a year ago; they remain trapped in the Tigrayan capital of Mekele.

"I don't know if they are alive or dead."

"The celebrations are beautiful, but we cannot be fully happy," 21-year-old Aziza Moustafa told AFP.

"Celebrating the Ashenda means a lot to me," said Ihab, 18, noting the significance of this tradition, passed down through generations of women.

In the Tigrinya language, Ashenda is a type of tall green grass found on river banks in the region. As part of the festivities, women wear skirts made of the weaved Ashenda grass over white cotton dresses with colourful embroidery.

Ethiopian Reem Suhail, wearing a headband in the colours of Tigray's flag, takes part in the Ashenda celebrations. By ASHRAF SHAZLY (AFP)

In Khartoum, the women were playing drums to traditional music, with many wearing headbands of red and yellow, the colours of the Tigrayan flag. Traditional chicken stew and flatbread was also served to the crowd.

The Tigray conflict has displaced around two million people but the death toll remains unknown as the region reels from a near-complete blockade and a communications blackout.

But many still hold on to hopes that the war will end.

"Hopefully, we can celebrate it next year in Tigray," said Naabali of the holiday.