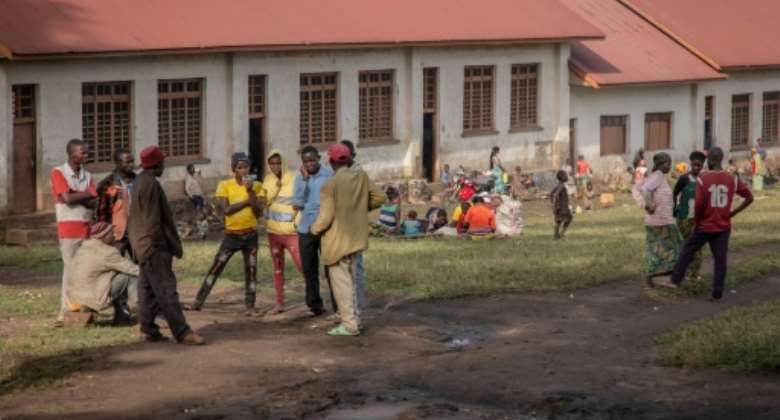 In April, schools in Rutshuru were requisitioned to house people displaced by fighting. By Guerchom NDEBO (AFP)

Brandishing sticks, parents and children blocked the path of other parents with children trying to get to classrooms for the start of the school year. Police were deployed to prevent the angry confrontation from getting out of hand.

Eastern Democratic Republic of Congo is no stranger to conflict, but this year even the simple act of going back to school has been freighted with recrimination and division.

This scene played out on Monday in Rutshuru territory in North Kivu province -- the epicentre of clashes pitching government forces and UN peacekeepers against a militia called the M23.

The conflict has forced tens of thousands of people to flee their homes, creating a crisis that now ricochets across many sectors, especially lodging and education.

Rugabo school, like others visited by an AFP team on Monday, had been used to house displaced families during the long school break.

Now that September had come, those people were under pressure to vacate the classrooms so that local children could go back to school.

Yet at the same time, their own children were unable to enrol for class -- a double grievance that prompted the bitter protest.

"They are turfing us out of the schools so that children who live in central Rutshuru can go to class, while our children are deprived of education," said Mapendo Ruziki, a 40-year-old displaced mother of three, who joined the protest.

"What makes their children so special?" she asked.

"It's shameful! Our children have to be educated, like the children of those in power and those in other parts of the country," exclaimed Gisele Bikweto, a 39-year-old mother of four, carrying the youngest on her back.

Inside the school, the desks had been broken up to provide frames for mosquito nets for bedroom areas for displaced families.

Efforts to resume classes were put on hold as the local authorities attempted to figure out a solution.

"We are currently looking at ways by which schoolchildren from central Rutshuru attend class in the morning and displaced (schoolchildren) go in the afternoon," said Luc Bakole Nyengeke, the territory's military administrator.

Flight: the clashes prompted an exodus of tens of thousands of people. By Esdras TSONGO (AFP/File)

But a big problem, he admitted, was getting displaced families to leave the schools during daytime so that the classrooms could be used.

"This is where we live, because we have nowhere else to go. This classroom is our home," said Fabiola Nyarahabwa, who took part in the protest.

"If they turn us out of here, where do we go? We don't want to sleep out in the open, we have been displaced by war."

A Congolese Tutsi group, the M23, is one of scores of armed groups that roam eastern DR Congo, many of them a legacy of two full-blown wars in the region in the last decade of the 20th century.

The group, whose full name is March 23 Movement, first leapt to prominence in 2012 when it briefly captured the city of Goma before a joint Congolese-UN offensive drove it out.

After lying mostly dormant for years, the rebels resumed fighting late last year, seizing the strategic town of Bunagana on the Ugandan border in June and prompting thousands of people to flee their homes.

"We want Bunagana and our villages to be freed so that our kids can also go back to school," said a woman who gave her name as Elizabeth, a leader of displaced people at a stadium where more than 450 families have been given shelter.

"I've got five children -- how are they going to study if there's no peace?" asked Jonas Semutaga, a 62-year-old man dressed in an old grey jacket.

"The Congolese state has to end this war so that we can go back to our villages and let our children go back to school," said Alexis Senga, one of those displaced.

"All children have the same rights," he said. "Our children also have the right to education."