65-year-old man, two women, others arrested at Wee base in Ashanti Region 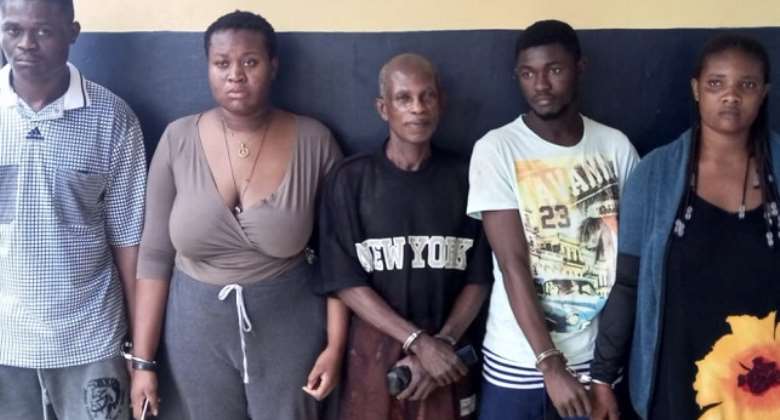 A 67-YEAR-old man has been arrested at a known narcotic base also known as 'Wee Base' during an unannounced police operation to prevent the use and sale of narcotic drugs in the Ashanti Region.

Nat Amoakohene, the old man, was arrested alongside four other suspects, including two females during the successful security operation, which also saw armed policemen raiding some drinking spots.

The four remaining suspects, who are all in police custody now, are Albert Prempeh, aged 28 and Patrick Amo, 23. The other two, who are females, are Modesto Afriyie Bekoe, 21 years old and Abigail Botchway, 25.

The unannounced police operation was conducted at ghettos located at Paah New Site near Trede, Dominase and Kotwi all in the Ashanti Region around 5:30am on August 23, 2022.

Officers from the Drug Law Enforcement Unit (DLEU) of the Ghana Police Service, who conducted the operation, managed to seize compressed sellotaped parcels of dried leaves suspected to be 'wee' during the operation.

A police document, which confirmed the arrest of the suspects and seizure of the exhibits, noted that all the five suspects are now in police custody with the exhibits as investigations continue.

The report, sighted by the DAILY GUIDE, said all the narcotic bases and drinking spots where the suspects were arrested, were subjected to thorough search, leading to the retrieval of the exhibits.

“Search conducted at the various locations led to the retrieval of a multi-coloured Ghana-Must-Go bag containing 13 compressed sellotaped parcels of dried leaves,” the police document disclosed.

The report added that “a blue polythene bag containing 45 newspaper wraps of dried leaves and a pan containing dried leaves, all suspected to be narcotic drugs and 6 blisters of Tramadol,” were also retrieved.