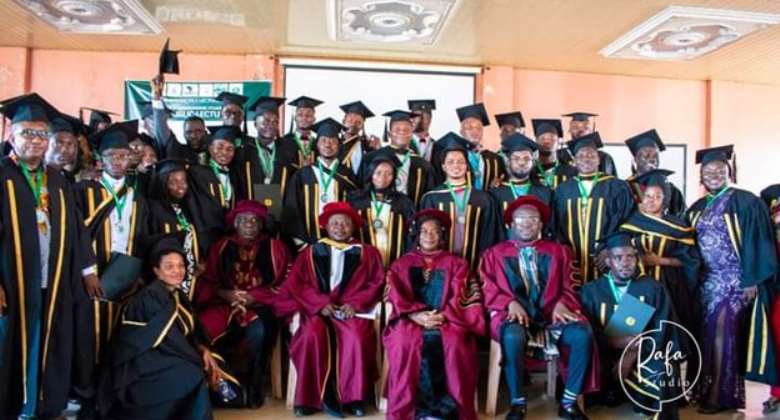 Group photograph of the Medical Journalists

According to Prof. Raphael Nyarkotey Obu, medical and science writing has given him huge recognition, especially in areas where many people have neglected. Hence, he found the need to train the Naturopathic Medical students in Medical and science reporting to help write on science issues. Facilitators for the program were drawn from both medical and Journalism Professions.

Prof. Nyarkotey noted that medical Journalism appears new to the Ghanaian jurisdiction, he believes that the naturopathic medical students' training and successful completion is important to the general public as there have been misrepresentations and reports, especially about the practice of Herbal, Complementary and Alternative medicine due to mainstream lack of knowledge in this field and this is one major area I would want you, to diffuse as a Medial Journalists, he said.

Prof. Nyarkotey whose articles most often make the headlines in the national papers also notes that “It is rather sad that in Ghana, we have succeeded in demeaning our local foods and natural medicines when other countries are raking in millions of dollars. But I am happy there is a new revolution in the media with the support given to the publication of my frequent articles”.

He also notes that his frequent publications have caused a huge national debate on whether our local foods are good or not. “Through my articles, many people have found that not all starched foods are bad for our health as just the news of hearing about starchy foods became a bad public image. Today, we know by science that resistant starch we get from our local delicacies such as cassava fufu, Gari, etc is good for our colon health as they resist digestion”.

He was quick to add that “Although medical news articles often deliver public health messages effectively, they often convey wrong or misleading information about health care, partly when reporters do not know or cannot convey the results of clinical studies, and partly when they fail to supply reasonable context. This can result in unrealistic expectations due to coverage of radical medical procedures and experimental technology.”

Prof. Nyarkotey also added that mass media news outlets can also create a "communications storm" to shift attention to a single health issue and this has been painted for years to demean herbal and alternative Practices. “Your role in medical journalism can also influence an individual's quality of healthcare. So I urge you all to be diligent and pursue excellence. Do not be swayed by money and short-term success. But be bold, courageous, and have confidence. Build a good brand in medical journalism and I can tell you where it will lead you”. He urged the Naturopathic Medical Students to be the new wine in medical journalism to propagate the profession of Naturopathic Medicine.