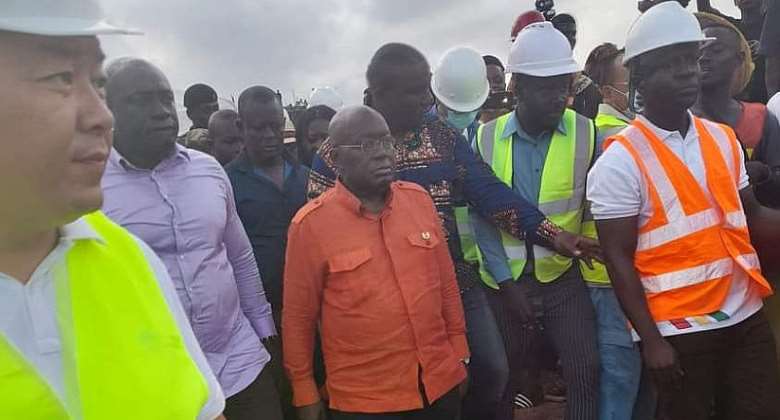 The President of the Republic of Ghana, His Excellency Nana Addo Dankwa Akufo-Addo last Friday inspected the progress of work on the ongoing Agenda 111 District Hospital at Gomoa Afransi in the Gomoa Central District of the Central Region.

Accompanied by the Central Regional Minister, Hon, Mrs. Justina Marigold Assan and other dignitaries, the expression on the face of the President was an indication that he was happy with progress of work.

The Member of Parliament for Gomoa Central constituency, Hon. Naana Eyiah who is also the Deputy Minister for the Interior led President Akufo Addo to exchange greetings with Nananom drawn from Gomoa Asin and Gomoa Ajumako Traditional Areas respectively.

The brief visit to the 20% complete project was to get first-hand information on the project which is scheduled to be completed within the 18-month duration to boost healthcare delivery in the Gomoa Central District.

The President's visit drew large crowd from Gomoa Afransi and its surrounding communities amidst drumming and dancing in praises of God and the NPP Government for considering the health needs of the people in the district.

The President had earlier in the day commissioned a Circuit Court at Kasoa, cut sod for the reconstruction of Kasoa-Bawjiase Road and commissioned One District One Factory at Gomoa Akoti in the Gomoa East District.

The visit was part of President Akufo Addo's two-day tour of the Central Region to inspect progress of work on ongoing development projects in the Region.

Inflation will remain high till the end of first quarter of ...
52 minutes ago