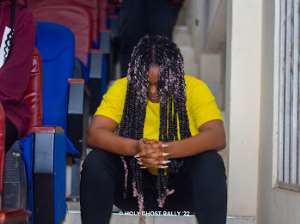 At a point in your life you've probably asked the Why, How, When?
Or even dared to ask,
Does He truly exist?
If He does:
Why then is the world filled with hate
When His very existence is supposed to be love?
How do the wicked prosper when He said their end is death?
When will He fully truly reveal himself?
We're tired of the mysteries and the end that never comes
Does He really have a divine plan?
Cos if you ask me, the world is in chaos right now
And oh,
Lucifer.....
Is the devil real
Is he really evil
Cos I'm sure they said he was once a beautiful angel
Is the devil really a liar or the usual protagonist whose heroism will be revealed in the end?
And the famous eternal burning flame,
Is hell a man-made pun to steer man off the easy way,
Cos you and I know, its Easier without God
And the biggest question,
Who created God.

Now if the existence of a child is proof of his parents
And the existence of the Swiss watch is proof of a watch maker
What is the proof of your God's existence?
Some say its the bible
So maybe the bible is a story book,
And coincidentally its prophecies still come to pass
Maybe its the world's best literary work of art
And coincidentally has the keys to man's heart
Yes maybe it wasn't God inspired at all
Yet, it defines our very existence- your very existence
The only reasonable creation story-
If you want to be reasonable that is
I know I didn't evolve from a monkey
Or else a monkey should be turning human two seconds from now
And if the proof of a creator is in the existence of its creation,
Then the particles in the big bang theory surely had a creator
Or else your Supreme being is a particle
At least the scientist even agree that is must have been created by an unimaginable
power
They just cannot seem to grasp the power of our Lord
And if He exists, then He must be Supreme
Or else he'll need a creator
Then on and on the cycle goes
With no true source

You want proof that God exists,
the proof that science refuses to admit
The one the world resists?
They look at the stars in outer space
But its right here in this place,
In the intricate designs of our face
Every living thing, you and I
The mere seed of a weed science cannot make
It can replicate, genetically modify, but cannot create- out of nothing that is
Yet they seem to have the answer to how you: beautifully and wonderfully formed was made.

The existence of science supposed to Glorify our God
Was twisted and turned into conspiracy theories against-theism
A-theism
The atheist.
Maybe they can explain the science behind Jesus walking on water and Peter walking too by faith
Or estimate the gravitational loss needed for His ascension into heaven -
with our feet firmly planted on earth
Lets make it easier
Derive the force needed for a rod to put the red sea asunder
Or even calculate the rational ratio of 5000 men to 5 loaves with 12 baskets left over - women and children unaccounted for
Too hard?
Their simple biology can't explain how the lions fed in the ark and all other animals still survived?

Lets look at it from this angle
Our God insulated the feet of the bird before the creation of electric poles
He made the fish and bird streamlined to define the aerodynamics science now imitates
He made the light, water, land, plants, animals, and man in that order
The basic scientific requirements for survival satisfied before the creation of man
Our light dwells in the deepest of darkness
And they said we contradicted ourselves
Forgetting that in the darkness light is brightest
And also the fastest- source of energy that is
He created all things, then created man in His own image- a creator
Necessity they said was the mother of invention
Forgetting we're just exhibiting our first given gift
He created us in His image
Gave us power
Gave us dominion
Then He rested
But we messed up so he still works
That is how He gave His son
All we had to do is believe
And all His work is done
-Jeshurun