Passing The Buck Over Galamsey Doesn’t Work Any More 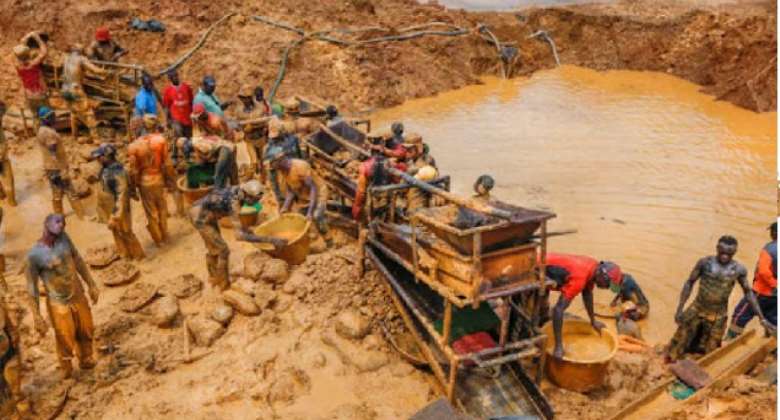 EVERYONE in Ghana knows that the answer to the galamsey problem is to end it once and for all.

And indeed, several “operations” have been put into practice for (so we were told when each “operation” was launched) just that purpose. But, regrettably, the words have never been quite translated into action.

Why? We weren’t told! Hopefully, the authors of the “operations” have become as tired of the words, words, words, as the rest of the populace are.

In some countries, these changes in nomenclature with regard to the same objective would have been greeted with hysterical laughter. For if (1) did not succeed, why should (2) fare any better? And as for changing the name of the “operation” from “Vanguard” to “Halt” and yet append the same (1) and (2) sub-classifications to them again – does it not suggest confusion?

Yes, if you entrust the solution of your most visible socio-political problem to bureaucrats and public relations practitioners or spin doctors, you are in danger of being presented with a set of glib “Rules and Numbers”.

So, when asked, “What are you doing about excavators engaged in galamsey”? Quick as a flash the answer is parroted out: “Oh, check Section Q A Subsection A Q of Act 995”. That section provides a deterrent to that particular malfeasance”. Ahem!

Well, an almighty row has inevitably broken out in many sectors of the society over the palpable damage galamsey is doing to the country. It appears that some chiefs in the country, stung by the bad (but merited) publicity they have received since they attempted to punish one man and a radio station on which he had made remarks regarded by the chiefs as showing £disrespect” towards them, are now daring to tell off members of the Government.

This report, for instance, states the problem squarely:

QUOTE: “Some chiefs in the Ashanti Region have refuted claims that traditional leaders have a hand in illegal mining activities. According to them, politicians should be blamed for the persistence of the canker and not them.

“This position [emerged at] a dialogue held [with] the Deputy Lands and Natural Resources Minister, Mr George Mireku Duker, [who at a gathering with chiefs] had laid emphasis on the role chiefs [should play] in ending the menace...

“Taking their turn to address the Minister, the chiefs [acknowledged] that as custodians of lands, they can order illegal mining to stop. However [they claimed] their powers have been overridden by some politicians.

“According to them, political figures are fuelling the menace by giving licences to miners, who, in turn, destroy the environment and their deities. [It will be recalled that some rivers and streams are treated as sacredin many areas].

“All of us gathered here” (one chief observed) “know those polluting our water bodies. We can’t deny that. Every land in Ghana has a custodian [and] if we decide to ban mining on our water bodies, it will end....

“Our cocoa farms and forests have been destroyed because of you politicians. The miners come with licenses from you and they are [sometimes] protected by soldiers and police. [So] now, all our sacred places have been destroyed,” UNQUOTE. This was an eloquent charge passionately by one queen mother at the gathering, distributing the blame equally on her fellow chiefs and the politicians.

But despite being exposed to such views, Mr Duker has boldly predicted that his Ministry would “make sure that all water bodies polluted by illegal mining are restored to their natural state by March 2023!!”

Speaking on the TV programme, Upfront, the Deputy Minister said the state had “put in fresh measures to ensure that the pollution of the rivers becomes a thing of the past.”

But some scientific studies have shown that galamsey, especially on major rivers, “is likely to constrain Ghana into importing water from other countries, by 2030.”

However, during his TV appearance, Mr. Duker insisted that: “what I’m telling you, on behalf of the sector Minister, Mr. Samuel Abu Jinapor, and my good self, is that by March next year (2023), we will have something to show to Ghanaians in terms of getting our river bodies clean.”

But the Deputy Minister, upon being asked whether he would resign if his plan failed, brushed that aside, stating:”The issue of illegal mining “is not life and death”.

“It’s not life and death,” (he retorted) adding irrelevantly that “Ghanaians know and appreciate when you work hard... I’ll make sure that I support my country to protect the river bodies and by March (2023), I’ll have something to show.” Very easily said, isn’t it?

Indeed, it may truly not be “life and death” to Mr Duker and to other members of the Government. But to those who need to buy sachet water from roadside hawkers whenever they feel thirsty, it IS a “life and death” issue.

First of all, what happens to them when they do not have the forty pesewas or so charged for sachet water?

Secondly, even if they are able to drink water and quench their thirst for the moment, what happens when they get home and they want to wash their sweat-soaked clothing? Where will they get the water from? And with what water do they take a shower,as they should, after a hard day’s work?

Anyway, Mr Duker, is it not rash of you to name March 2030 as the date when the rivers would be clear of pollution, when you know the failure that had greeted the efforts by the Ministry of Environment, Science and Technology, to employ drones and other modern communications equipment, to monitor our rivers and forests to detectwhether excavators were being used on them for galamsey? What happened to the idea of installing gadgets on excavators when they are licensed, so that their every movement can be accurately pinpointed?

What happened to”OPERATION GALAMSTOP“, Mr Duker? Did it manage to come even close to ending galamsey? Despite the reports your Ministry must possess about how and why that operation failed, you want us to believe that your Ministry can end galamsey by March 2030?

Well I wish your Ministry good luck. But let me warn you: you do face an unenviable situation. The Minerals Commission, which is the operative arm of your Ministry (as far as ending galamsey is concerned), has a long history of neglect regarding how to implement crucial anti-galamsey measures.

For instance, please just ask the Commission this: “how many times have you taken to Parliament, applications submitted to you for permits and licences to mine, that require ratification by Parliament?

Is it not a constitutional requirement that Parliament should ratify all applications for permission to mine in Ghana?

Finally, as for the Government itself, please tell us: how many persons has it prosecuted for offences committed under ACT 995, since the Act was given the presidential assent in November 2019?”

Answers to these questions are eagerly awaited.