The Information Minister Has Awakened From His Slumber 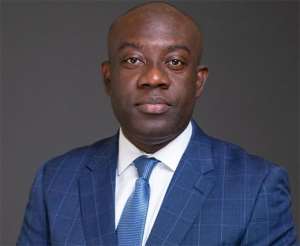 GHANAIANS HAVE become tired of listening. They have closed their ears to all cacophonous noises and have deliberately refused to listen to politicians. In fact, they are confused as to who is telling the truth: the opposition or the ruling government. That is the truth.

A few weeks ago, I wrote in this column that the government communication machinery has broken down and needs oxygen. I served notice that if the Minister of Information, Mr. Oppong Nkrumah, refuses to think and be up and doing, I will rain hellfire on his shoulders. I gave a one-month ultimatum but from what I watched on my TV set last week when the President paid a working visit to the Northern regions, I hereby withdraw the ultimatum. It seems my piece, the other day, has aroused consciousness in the Minister of Information, a man I liked so much many years before he entered politics. He doesn't pick my calls but do I care? After all, when the sea is rough, the fishes don't give a dime. That is why they did not follow Prophet Noah into the Ark during the great deluge.

The NDC has been winning the propaganda war while the NPP continues to be mesmerised by the powerful NDC vile propaganda war machine. I wrote in that piece that the NPP communicators should take the battle to the doorsteps of the NDC, but no one seemed to listen to me. A typical example is the noise being made by the NDC communicators that they have not seen anything Government has used the loans it contracted to do in this country. Believe you me, that has been imbibed by many rural folks as true. But, what people should understand is that unlike the years gone by, pictures on the screens of TV stations are more understandable to the poor illiterate living in the villages than press conferences and long talk. And these people are in the majority. We are all aware that before a loan is approved by Parliament, what the loan would be used for is spelled out by the Minister of Finance anytime he goes to Parliament.

Projects undertaken by the government are located in constituencies in the country where we have Parliamentarians, MMDCEs and NPP communicators. If an NDC MP sees a project located in his constituency and deliberately decides to look the other way and says he saw nothing, in the name of propaganda, what about constituencies where we have NPP Parliamentarians? Are they wearing wooden sunglasses? And what about the MMDCEs and party communicators who live in these constituencies? No wonder Teacher Osei Kojo used to tell us that “common sense is not common.” Very sad indeed!!

When the President visited the Northern regions a week ago, the Ministry of Information hooked about eight TV stations to all the programmes simultaneously. Ghanaians saw ongoing road projects, hospitals under Agenda 111, school blocks and many projects being executed by the government. Mr. Lazy MCE/DCE, should it take the visit of the President to your area before we see such wonderful performance of the government? When the Ghanaian says 'seeing is believing', he means he only believes in what he sees but not what he hears. At one of the sites of the buildings of the Agenda111 projects, the President was not satisfied with the progress of work and warned the contractor to meet the deadline set by the government since the project is dear to his heart. What was the MCE/DCE doing before the President visited the place? Don't they go on inspections at project sites? Heads must start to roll.

The Ministry of Trade and Industry is always quick to tell us the number of factories built under the One District One Factory programme and ongoing ones but has failed to show us these factories on TV for those of us who do not live where the factories are built to see. What keeps the ministry from doing what the Ministry of Information has done? Taken for granted that it is not their duty to inform the populace about these projects, can't the ministry also chip part of their budget to pay for adverts? Today in Ghana, almost every household has a television set and that is an advantage to the government who wants the people to see what it is doing. Do you expect the President to add this to his burden?

The Ministry of Roads and Highways is the guiltiest as far as informing the populace about road construction is concerned. Those of us who frequently travel around the country do see good roads constructed and some under construction by this government. We have people who sit in Accra and comment on bad roads when they have never moved out of Accra over so many years to see what is happening. I know a sixty-year-old man in Takoradi who has never visited Accra, Kumasi or Koforidua, etc. not to talk of the Northern regions throughout his life. Anyway, what is he going to do there? Such people too believe the NDC when their communicators say the government has not built a kilometer of road for the past five years. Is Mr. Amoako Atta listening?

What many Ghanaians do not know is that the Double Track System of Education, which came into effect after the Free SHS was introduced due to the high intake of new students, is gradually being phased out. But who will inform them if not the Ministry of Information? Many District and Municipal Assemblies have constructed dormitories, school blocks, dining halls and other facilities to accommodate the students. Do you hear NDC communicators talking about Double Track again? Noisy Okudzeto Ablakwa told Ghanaians that the Free SHS will collapse in a matter of five years. The programme has entered its fifth year and still moving forward. What is this 'Honourable' Member of Parliament from the Volta Region telling Ghanaians again? You now see how some people do not have SHAME in their lexicons?

Now to the Minister of Information: “The bend of the road is not the end of the road unless you refuse to turn.” This is a valuable thought for a minister who wants to improve upon his performance. Get on the good foot, Mr. Minister. Waiting for election year before informing the people about the achievements of government is politically suicidal. Think!!!